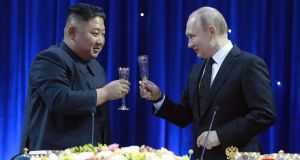 Kim Jong-un and Vladimir Putin raise their glasses for a toast at their meeting in the Russian port city of Vladivostok on Thursday. Photograph: KCNA via KNS/AFP/Getty Images

North Korean leader Kim Jong-un told Russian president Vladimir Putin that peace and security on the Korean peninsula depended on the US, warning that a state of hostility could easily return, North Korean media said on Friday.

Mr Kim’s remarks during talks with Mr Putin on Thursday appeared aimed at pushing Washington to be more flexible on North Korean demands for an easing of international sanctions.

US president Donald Trump, who ended a second summit with Mr Kim in February without a deal for North Korea to give up its nuclear weapons, seemed unperturbed, saying a lot of progress was being made towards an agreement and welcoming Mr Putin’s support in this regard.

Mr Putin said after holding his first face-to-face talks with Mr Kim, in the Russian Pacific port of Vladivostok, on Thursday that US security guarantees would probably not be enough to persuade Pyongyang to give up its nuclear programme.

He said he believed any US guarantees might need to be supported by the other nations involved in previous six-way talks on the nuclear issue, which included Russia, China, Japan and South Korea as well as the US and North Korea.

“I think we’re doing very well with North Korea. A lot of progress is being made,” Mr Trump told reporters at the White House. “I appreciated president Putin’s statement yesterday. He wants to see it done also. I think there’s a lot of excitement for getting a deal done with North Korea.”

The Trump-Kim summit in Hanoi in February collapsed without progress on a US demand that North Korea give up its nuclear weapons and on North Korean demands for easing of sanctions.

Mr Kim has said he would wait until the end of the year for the US to be more flexible.

“The situation on the Korean peninsula and the region is now at a standstill, and has reached a critical point where it may return to its original state as the US took a unilateral attitude in bad faith at the recent second DPRK-US summit talks,” North Korea’s official KCNA news agency quoted Mr Kim as saying.

“The DPRK will gird itself for every possible situation,” KCNA also quoted Mr Kim as saying.

William Hagerty, the US ambassador to Japan, told a Washington think tank on Thursday that Mr Kim’s contacts with both Russia and China were part of an effort to seek relief from sanctions, and that it was important the international community continues to enforce these.

“The fact you see Kim Jong-un meeting with Vladimir Putin underscores the fact that the sanctions are working and the sanctions are putting extreme economic pressure on the North Korean regime,” Mr Hagerty said.

The first face-to-face talks between Mr Putin and Mr Kim, held on an island off the Russian Pacific city, did not appear to yield any major breakthrough.

The two discussed ways to promote strategic communication and tactical collaboration in the course of ensuring peace and security on the Korean peninsula and beyond, KCNA said.

Mr Putin said a deal on North Korea’s nuclear programme was possible by moving step by step to build trust.

Russia was for years a participant in the six-party talks, which have not been held since 2009.

“They [North Korea] only need guarantees about their security. That’s it. All of us together need to think about this,” Mr Putin told reporters after talks with Mr Kim. Such guarantees would have to be international, legally binding, and vouch for North Korea’s sovereignty, Mr Putin said.

Russia and North Korea agreed to increase co-operation and Mr Putin accepted an invitation by Mr Kim to visit North Korea, KCNA said. No date was announced for the visit.

“North Korea seems to be trying to expand its negotiating position with the US,” said South Korea’s ambassador to the US, Cho Yoon-je, according to the Yonhap news agency.

“The US continues to send a message to North Korea through channels at every level that it is open to dialogue . . . The expectation seems to be that the North may respond once chairman Kim Jong-un’s diplomatic schedule is completed.” – Reuters