Tepco does U-turn on Fukushima contamination 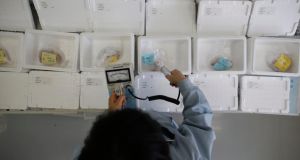 The announcement is yet another example of Tokyo Electric initially downplaying a problem, only to revise its findings because of faulty procedures. It casts further doubt over its control over the cleanup of the worst nuclear disaster since Chernobyl in 1986.

“Once again, they’ve missed something they should be aware of,” said Atsushi Kasai, a former researcher of radiation protection at the Japan Atomic Energy Research Institute.

“This shows again they lack the qualification to be managing the plant, which is the root cause of their failure to contain the March 11th disaster.”

Radioactive leaks
In recent weeks, the company has been battling with leaks of radioactive water and power outages – more than two years after an earthquake and tsunami knocked out power and cooling, and caused three reactor meltdowns.

The discovery that groundwater is also being contaminated before it enters the damaged reactor buildings compounds the problems for the company known as Tepco.

It has been trying to convince local authorities and fishermen that the groundwater has negligible levels of contamination and is safe enough to be dumped into the ocean.

About 400 tonnes of groundwater flow daily into the reactor buildings only to be mixed with highly contaminated water that comes from cooling the melted fuel.

That water has to be stored in tanks and pits. Leaks in the latter in recent weeks have prompted the scramble to build more tanks.

Tepco on May 30th told fishermen that radioactive caesium in the groundwater was at a level that could not be detected.

But the results were false as they were skewed by using procedures that failed to take into account the background radiation at the damaged plant, Tepco said yesterday. The findings were reported earlier by local media.

“We’ll have to correct the way we analyse sample data,” said Mayumi Yoshida, a Tepco spokeswoman.

The revised results still show the radiation level to be below what Tepco views as the upper limit for releasing groundwater – one becquerel of caesium-137 per litre. A becquerel is a measure of radioactivity.