Demonstrations against army corruption in Egypt result in claims of 2,000 arrests 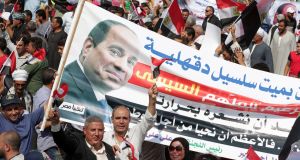 Egyptian security forces tried to head off protests on Friday amid reports that 2,000 Egyptians have been arrested since last weekend’s unexpected demonstrations demanding an end to corruption in the military, and the resignation of President Abdel Fattah al-Sisi.

Sources reported protests on Friday in Giza on the edge of Cairo and in the provinces where the security forces cannot exercise full control. There were also government-arranged pro-Sisi demos in east Cairo.

Stirred by social media posts by Mohamed Ali (45), an Egyptian actor and businessman exiled in Barcelona, the protests have shaken the authoritarian Sisi government which has jailed Muslim Brotherhood members, leftists, trade unionists, journalists and activists since seizing power in 2013.

A contractor who claims the military owes him money, Ali also alleges the military, which dominates the economy, has misappropriated state funds and accuses Sisi of building palaces.

Egyptians are angry over Sisi’s adoption of International Monetary Fund-mandated austerity measures which have devalued the currency, raised prices of food and fuel and boosted the poverty rate to more than 35 per cent. Instead of providing hospitals, schools and services for 97.5 million Egyptians, he has spent billions of dollars on expansion of the Suez Canal and construction of a new capital city.

Taken by surprise by the protests, Sisi has vowed to prevent mass popular action and this week cracked down hard, particularly on those who gathered in Cairo’s Tahrir Square last Friday. In 2011, hundreds of thousands of Egyptians of all ages, backgrounds, and political persuasions gathered there to demand the ousting of 30-year president Hosni Mubarak.

The majority of the new crop of detainees is under 25, youths who matured after Sisi abandoned the uprising’s slogan of “Bread, Freedom, Justice”. They have been joined by defectors from the Sisi camp and influential political veterans.

Academic and commentator Hassan Nafaa and opposition Constitution party spokesman Khaled Daoud backed Sisi’s 2013 seizure of power from the Muslim Brotherhood’s Mohamed Morsi. Hazem Hosni, a political scientist, has joined his boss, former army chief Sami Anan, who was jailed after declaring his intention to stand against Sisi in the 2018 presidential election.

Award-winning rights lawyer Mahienour el-Massry was in court representing protesters when she was detained. Feminist Asmaa Dabees, her husband and brother-in-law have disappeared after being snatched from a cafe in Damanhour province.

The veterans are not collaborators of the outlawed and repressed Muslim Brotherhood, an accusation put forward by the state to justify detentions. They belong to the secular, liberal sector of society.

In July, co-founder of Egypt’s Palestinian Boycott, Divest, and Sanction (BDS) movement Ramy Shaath was arrested and his wife Celine Lebrun-Shaath deported. He spoke out against US-allied Egypt’s presence at the Trump administration’s Bahrain conference promoting an Arab-Israeli settlement plan rejected by the Palestinians. His father, Nabil Shaath, is a former Palestinian foreign minister and negotiator.

Amnesty International considers Ramy Shaath a prisoner of conscience and has called for his “immediate and unconditional release”.

Human Rights Watch has estimated Egypt has arrested or charged at least 60,000 people for crimes allegedly related to “political Islam”. US president Donald Trump, who met Sisi on the sidelines of the UN General Assembly, has dubbed him “ my favourite dictator”.