Taiwan frontrunner conciliatory towards China ahead of poll 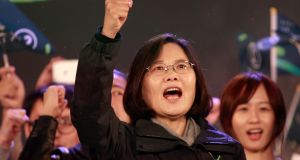 On the eve of presidential elections in self-ruled Taiwan, frontrunner Tsai Ing-wen adopted a conciliatory tone saying she would pursue peaceful relations with China if she wins Saturday’s ballot.

“I have made it clear, and said it during the [televised] campaign platform presentation that, once elected, I would immediately start communicating with our diplomatic allies and with China,” Tsai told a campaign rally in Kaohsiung. “I know that stability across the Taiwan Strait is in our shared interests. I would do my best to maintain that stability.”

This election is more muted than usual after city authorities banned election advertising in public spaces such as roads, bridges and parks in 2014, although the usual firecrackers and noisy celebrations are expected when results start coming in on Saturday evening.

During his eight years in power, current president Ma Ying-jeou from the Kuomintang (KMT) party, which has ruled Taiwan since Chiang Kai-shek fled there in 1949, with the exception of 2000-2008 when the Democratic Progressive Party (DPP) was in charge, has worked to improve relations with mainland China.

The culmination of this was the historic handshake between Ma and Chinese president Xi Jinping in Singapore in November last year.

Taiwan’s democracy is an energetic one. Direct presidential elections only began in 1996 but since then it has become a democratic role model in the region, although the regular brawls among lawmakers in the Executive Yuan are a less appealing side of democracy on the island.

The voting age is 20, and there are more than 18 million eligible voters, who can vote at 15,582 polling stations between 8am and 4pm.

Opinion polls by local media show Tsai has a huge advantage over the KMT candidate Eric Chu, with the DPP candidate reckoned to have about 45 per cent of the vote compared to Chu’s 20 per cent and 10 per cent for James Soong of the People First Party.

The big gap between Tsai and the other candidates has led to more muted sentiment, even in southern and central Taiwan, the DPP’s traditional stronghold.

“It’s been around 20 per cent for a very long time, more than six months of consecutive polls showing who will be the winner. This kind of fact discourages voters to rally and say yes, we have a chance. Even on the winning side they say, why bother campaigning?” political analyst Dr Alexander Huang of Tamkang University told China News Agency.

Dr Huang expects voter turnout to be relatively low. The lowest ever was in 2012 when turnout was 74 per cent.

Sentiment can change quickly, of course. Passions were stirred during the 2004 election when former president Chen Shui Bian was shot a day before the poll.

The two main candidates are rather similar – both hail from the Taiwanese political elite. Ma (65) and Tsai (59) were both educated abroad – he at Harvard Law School and she at the London School of Economics.

China is wary of the DPP, as it believes that the party will push for independence or a separate identity, something Beijing will never tolerate as it considers Taiwan part of China. If the DPP did push for independence, regional tensions would escalate fast. China might even consider invading Taiwan and that would bring the United States, which has pledged to defend Taiwan if China attacks it.

The White House called on Taiwan and China to avoid an escalation of tensions from elections in Taiwan if the DPP wins.

China took a firm stance in comments this week, warning that it will not tolerate any moves by Tsai to undermine China’s sovereignty claims.

Taiwan’s relationship with China and sovereignty issues are strong features in this election, but this election appears more focused on the sluggish state of the economy, which is barely expanding and has become too dependent on China.

Economic growth was less than 1 per cent in 2014 and unemployment is running at around 4 per cent, which is considered high in Taiwan.

Real wages are also stagnating, while housing prices are rising and there is a feeling among the electorate that ordinary people are not benefiting from closer ties with China.

“The coming 2016 election has brought about a major paradigm shift in Taiwan politics, with the sovereignty issue being of less importance to most Taiwan voters than in the past,” analysts from the US-China Economic and Security Review Commission said in a report.

“While the incumbent KMT generally views Taiwan’s economic integration with the global economy, especially with its largest trade partner China, as key to future growth, the DPP has prioritised improving Taiwan’s domestic economy and using local sources of growth to increase global competitiveness,” the commission said.