Scientists warn of melting Tibetan glaciers on roof of world 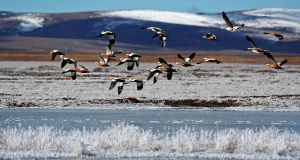 Qinghai Lake in China: environmental researchers are asking whether the lake is getting bigger due to more rainfall or because the glaciers at the roof of the world are melting faster – a dire foreboding of climate change. Photograph: China Photos/Getty Images

The herder sets off on his motorbike, a cigarette jammed firmly between his teeth, wearing a bright yellow padded jacket against the cold as he starts to round up his sheep high on the Tibetan plateau.

We pause often to make way for yaks and goats too, as we move around China’s largest salt lake, Koko Nor, or Qinghai in Chinese, or Tsongon Po to the Tibetans, which covers 4,432sq km (1,711 square miles) and recently has expanded by nearly 50sq km, after years of shrinking.

“Although my pasture was flooded a bit, it didn’t affect the growth of my sheep and cows. The ecology is getting better and the pasture is getting more lush,” says one herder.

The question environmental researchers are asking is whether the lake is getting bigger due to more rainfall or because the glaciers at the roof of the world are melting faster – another dire foreboding of climate change.

When government actors, environmentalists and lobbyists meet in Paris next week to find a compromise on carbon emissions that might limit global warming, the Tibetan plateau will be high on their agenda.

This is the source of the Yellow River, the Yangtze River, and the Mekong River. This is where Asia’s water comes from.

The herders live in tents scattered around the area, different shapes for different people – Mongolian gers are round with sloping roofs, while Tibetan tents are rectangular, some ornately decorated.

Qinghai is China’s heartland, a hardscrabble, tough place where five million people live in a place the size of France.

It’s one of the poorest provinces, the least visited until recently and is also rich in natural resources. The ancient Silk Road ran through here, and the area is ethnically mixed – Han, Hui, Tibetans, Kazakh, Mongolian, Tu and Salar inhabit the province. Qinghai was part of the Kingdom of Tibet until 1928.

There are differing theories about why the lake is expanding – some scientists say it is the result of the melting glaciers in the Himalayas, while others argue it is a temporary phenomenon caused by increased rainfall.

Liu Baokang, a senior engineer at the Qinghai Meteorological Bureau, said satellite images show the area of the lake has now reached 4,432.32sq km. The record size for the lake was 4,477.53sq km, recorded in 1974.

“This year between May and July, it has rained more than other years which has contributed to the maximum,” said Liu.

He believed the increase in the lake’s surface area was good for the ecological environment nearby.

“Qinghai Lake is the most important water body for the ecological safety of the Qinghai and Tibetan plateau and is the natural barrier to stop the desertification from the west moving eastwards,” said Liu.

Desertification of the mountain grasslands is speeding up the process of climate change, as it means the Tibetan plateau finds it harder to absorb moisture and is, therefore, more likely to radiate heat.

Dai Sheng, an analyst from the Qinghai Meteorological Bureau, said:“Within the past nine years, the water volume has increased 10 per cent.

“Moreover, with global warming, the faster melting of mountain glaciers has also caused the increased river runoff into the lake.”

Greenpeace says the bigger monsoon on the Tibetan Plateau has made the Qinghai Lake basin more warm and humid. The rainfall increase and temperature increase has increased the runoff to the lake, which has caused the continuous expansion.

“The lake will be back to the level it was in the 1970s. It is estimated that this result will ease the water shortage in the Qinghai Lake area and it is good for the restoration of vegetation and reduce the desertification area, which is beneficial to improve the ecological environment and national economy,” Greenpeace said in a response to questions from The Irish Times.

“I have been in Xining for the past five years,” wrote Wang Jian on Sina Weibo social media. “It’s getting warmer and warmer here and climate change is very obvious.

“I hope people can start to realise the problems brought by climate change in order to protect their homes.”