Return of TV confessions spells trouble for dissidents in China 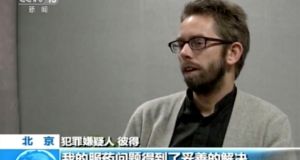 Overseas rights activists, Hong Kong publishers of salacious books about Communist leaders, business journalists reporting the stock market slide, as well as the usual supects such as human rights lawyers and drug-taking celebrities, have all been paraded on Chinese state television to proclaim their guilt.

In the last three years, the government’s anti-corruption drive and a crackdown on human rights activists and lawyers has seen a revival of self-confession, or jiantao, to underscore the hard-line approach by President Xi Jinping’s government to acts of dissent, especially amid fears of instability as the economy cools.

One of the most shocking to date was Peter Dahlin, Swedish co-founder of the NGO Chinese Urgent Action Working Group, who became the first foreigner to make what rights activists say was a coerced confession on state TV on charges relating to subversion.

Dahlin has been held by Chinese authorities for more than a fortnight on accusations of “providing funds for criminal activities”.

His appearance on TV came just days after Gui Minhai, coincidentally also a Swedish citizen and one of five missing Hong Kong booksellers who published gossipy books about the ruling Chinese Communist Party elite, made a bizarre confession on state broadcaster CCTV.

Gui, who disappeared while on holiday in Thailand, said he had voluntarily surrendered to Chinese authorities in October last year over his alleged involvement in a fatal hit-and-run incident in China 12 years ago.

His missing colleague Lee Bo, while he didn’t make a televised appearance, also made a public statement that appeared coerced, saying he was helping police with inquiries in southern China, and issued a statement condemning his colleague Gui.

“The tactical use of fear and shame can be seen to link these various acts of ‘confession’ – whether they involve journalists in China or booksellers in Hong Kong. This is not a new tactic at all, and it hearkens back to the letters of self-criticism, or jiantao, that were a constant feature of Chinese politics and society during the Mao era,” said Bandurski.

The case of the missing Hong Kong booksellers has prompted alarm for autonomy in Hong Kong, which is supposed to have press freedom and human rights guarantees under the territory’s Basic Law constitution.

Alvin YH Cheung of the Progressive Lawyers Group believes the disappearance of the Hong Kong booksellers had major implications for freedom in Hong Kong.

“It is difficult to overstate the significance of the enforced disappearances of the booksellers, particularly that of Lee Bo. The idea that mainland state security agents can kidnap someone – a foreign passport holder, no less – from Hong Kong without repercussions is particularly horrifying for Hong Kongers,” said Cheung.

Cheung believes that under Xi there is a concerted push to “seize speaking power” (ie, the ability to set the agenda) at home and abroad.

“This is the undercurrent behind moves as diverse as the deployment of the Great Cannon against GitHub, Alibaba’s acquisition of the South China Morning Post, and the bookseller disappearances. This likely serves domestic as much as foreign policy objectives – overseas publications had long been a way for disgruntled cadres to ‘get their own back’ or exert influence at home,” he said.

“I don’t think Gauthier’s expulsion was a turning point so much as a high-water mark [that may yet be surpassed],” said Cheung. He believes the traditional protection that foreigners enjoyed in China is now under threat.

Confessions by foreigners are relatively rare.

In 2013, Chinese state television broadcast a public confession by British corporate investigator Peter Humphrey, dressed in orange prison gear, who was held with his American wife, Yu Yingzeng, probably as part of a corruption probe into the GlaxoSmithKline corruption story in China. He was charged with operating illegal research companies and trafficking personal information about Chinese citizens, then later released on health grounds.

William Nee, China researcher at Amnesty International, believes the use of pre-trial forced confessions has become a key part of the crackdown on dissent.

“The goal of the videos seems to be to control the public narrative by presenting the targeted individual’s activities as highly nefarious and extremely harmful to China’s image and interests,” said Nee.

“But at the same time, the videos almost always attempt to discredit and smear the targeted individual by ‘exposing’ their supposed lack of ethics, their sexual indiscretions, personal corruption, or other humiliating personal details as a way to further discredit their activism and professional careers in the mind of the general public, but also as a way to make the targeted individual into a persona non grata among international and domestic supporters.”

Ho-fung Hung, associate professor of sociology at the Johns Hopkins University, says that the confessions are part of a trend towards a totalitarian style of control on the back of a weaker economy, and believes it won’t be surprising if the post-miracle “new normal” of Chinese politics turns out be “North Korea lite”.

“These confessions come together to indicate a troubling trend in Chinese politics – the revival of the practice of public confession that originated at the totalitarian period of China and the Soviet Union. This public confession, widely believed to be made by the convicted under threat and intense pressure, was rampant in Stalin and Mao’s times, and this is certainly at odds with the development of rule of law,” said Hung.

“It reflects a general totalitarian turn of the regime in the context of economic troubles and the feeling of political insecurity among the ruling faction of the elite,” he said.