North Korea missile 'not capable' of reaching US 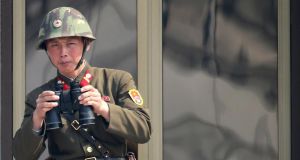 A North Korean soldier watches the South Korean side at the truce village of Panmunjom in the demilitarized zone separating the two Koreas in Paju, north of Seoul today. Photograph: Lee Jung-hoon/Yonhap/Reuters 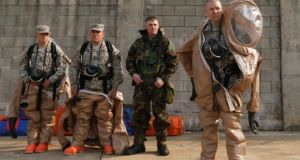 Soldiers of the US army’s 23rd chemical battalion put on their gear as they give a demonstration of their equipment during a ceremony to give notice of the battalion's official return to the 2nd Infantry Division based in South Korea, at Camp Stanley in Uijeongbu, north of Seoul. Photograph: Lee Jae-Won/Reuters 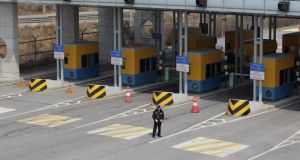 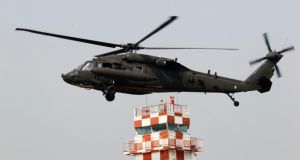 A US army helicopter approaches to land after a ceremony of the 23rd chemical battalion at Camp Stanley in Uijeongbu, north of Seoul, South Korea. Photograh: Lee Jae-Won/Reuters 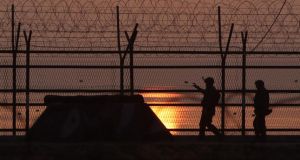 South Korea's defense chief has confirmed that North Korea has moved to its east coast a missile with a "considerable" range, but that it was not capable of reaching the United States. The disclosure comes as the Communist North's military warned that it was ready to strike US military forces with "cutting-edge smaller, lighter and diversified nuclear strike means".

Hours earlier, the United States announced plans to send a missile defence system to Guam to defend it from North Korea, as the US military adjusts to what defence secretary Chuck Hagel called a "real and clear danger" from Pyongyang.

North Korea has been issuing a series of threats in recent weeks, citing as targets the US military installations in the Pacific islands of Hawaii and Guam, as well as the US mainland. In its latest threat today, it did not name targets but said it was authorized to "take powerful practical military counteractions" against the threats from B-2 bombers from the United States, B-52 bombers from Guam and F-22 Stealth jet fighters from Japan that have recently run missions over the Korean Peninsula during joint military exercises with South Korea.

"The moment of explosion is approaching fast," the general staff of the North Korean People's Army said in a statement carried by the North's official Korean Central News Agency. "The US had better ponder over the prevailing grave situation."

Most analysts do not believe that North Korea has a missile powerful enough to deliver a nuclear warhead to the US mainland or that it is reckless enough to strike the US military in the Pacific. Still, with the North's postures showing no signs of letting up, the United States announced yesterday that it was speeding the deployment of an advanced missile-defense system to Guam in the next few weeks, two years ahead of schedule in what the Pentagon said was "a precautionary move" to protect US naval and air forces from the threat of a North Korean missile attack.

Washington had been informed of the potential attack by North Korea, a spokesman for its army said in a statement carried by the English-language service of state news agency KCNA. It was unclear how such a warning was given since North Korea does not have diplomatic ties with Washington.

The report from KCNA appeared to re-state many of the month-long fusillade of threats emanating from Pyongyang.

"It is yet another offering in a long line of provocative statements that only serve to further isolate North Korea from the rest of the international community and undermine its goal of economic development," Ms Hayden said.

Mr Hagel said he had to take the threats seriously, language he has used in recent weeks as the United States has revamped its missile defence plans and positioned two guided-missile destroyers in the western Pacific.

In the latest move, the Pentagon said it was deploying a Terminal High Altitude Area Defense (THAAD) system to Guam in the coming weeks. The THAAD system includes a truck-mounted launcher, interceptor missiles and an AN/TPY-2 tracking radar.

Last month, Mr Hagel said the Pentagon would add 14 new anti-missile interceptors in Alaska and move ahead with the deployment of a second missile-defence radar in Japan.

Yonhap quoted multiple government sources privy to intelligence from US and South Korean authorities as saying North Korea had moved what appeared to be a Musudan missile to its east coast.

The missile is believed to have a range of 3,000 km (1,865 miles) or more, which would put all of South Korea and Japan in range and possibly also Guam. North Korea is not believed to have tested the Musudan mid-range missiles, according to most independent experts

The missile was moved to the coast by train. The North has a missile launch site on its northeastern coast, which it has used to unsuccessfully test-fire long-range rockets in the past.

The South Korean government said the North would allow 222 South Korean workers to leave the Kaesong industrial zone on Thursday. That would leave another 606 South Koreans in the complex. Seoul has urged its citizens to get out.

North Korea has threatened to shut the complex, one of the impoverished North's few sources of ready cash.

The industrial park, just inside the border with North Korea, has not formally stopped operations since it was inaugurated in 2000. It houses 123 companies and employs 50,000 North Koreans making cheap goods such as clothing.

For a second straight day, North Korea blocked South Koreans from crossing the border to enter a jointly operated industrial park, threatening the future of the last remaining symbol of inter-Korean cooperation. It also warned that it would pull out more than 53,000 North Korean workers from the joint factory park, located in the North Korean city of Kaesong, if taunts from the South Korean media continued.

After the North's threat to close the industrial complex last week, some South Korean media reports have said that the North Korean leader, Kim Jong Un, would be all talk but no action when it came to the park because he did not want to risk one of his most precious sources of hard currency.

Events on the Korean peninsula have begun to unnerve global financial markets long used to the rhetoric North Korea routinely hurls at Seoul and Washington.

"The assumption remains that this is more bluster ...," said Rob Ryan, a strategist with RBS in Singapore. "But from here, we've reached a level of tensions that say things can't get too much worse without an actual exchange of fire."

The broadest index of Asia-Pacific shares outside Japan was down 0.6 per cent, dragged down by a 2 percent slump in South Korean shares, while the South Korean won slid 0.7 per cent against the US dollar.

US stocks sank yesterday after Mr Hagel's comments and the Guam deployment news.