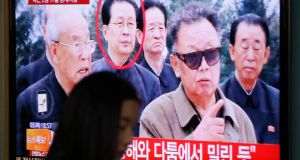 A woman walks past a television showing a report on Jang Song Thaek, North Korean leaders’ uncle, at a railway station in Seoul. Photograph: Kim Hong-Ji/Reuters

North Korea’s state-run television yesterday broadcast a rerun of a propaganda documentary about its leader, Kim Jong Un, after deleting all footage showing his uncle, Jang Song-thaek, who South Korean intelligence officials believe was recently dismissed from all his posts.

The erasing of Jang from the documentary was the clearest sign yet that Jang, who had long been considered the second most influential man in the reclusive North Korean government, has fallen from power.

In the past, when North Korea purged high-ranking officials, it destroyed the publications containing their photos or reissued them with their pictures blacked out.

The documentary featured Kim’s military-related activities, such as his visits to barracks to the rousing welcome of soldiers. In a dozen spots, Mr Jang was seen accompanying Mr Kim.

When Korean Central Television showed a rerun of the documentary Saturday after a 40-day hiatus, Mr Jang was nowhere to be seen.

The footage showing him was edited out or was replaced with new scenes, according to the comparisons of old and new versions shown in South Korean news media.

In North Korea, proximity to the top leader is considered the most public symbol of status and influence. Outside analysts monitor North Korean officials’ political fortunes by counting how often they are seen with Kim in public appearances.

Analysts recently began suspecting that Mr Jang was in trouble. Last year he was widely considered a caretaker of his nephew, helping Mr Kim consolidate power inherited from his father, Kim Jong Il, who died in late 2011.

Mr Jang accompanied Mr Kim in 76 percent of the top leader’s public appearances reported in North Korean media last year, more often than any other member of the regime.

But this year, Mr Jang showed up with Mr Kim only in 30 percent of the leader’s public appearances. Jang was last seen with Kim in North Korean media on October 10th.

Then in the past week, the National Intelligence Service of South Korea told Parliament that Mr Jang appeared to have fallen from power. Two of his most trusted aides, deputy departmental chiefs in the ruling Workers’ Party of Korea, were executed late last month for corruption, it said.

Mr Jang, 67, is the husband of the sister of Kim Jong Il. He had been twice purged in the past, but staged comebacks.

The purging of his images from official North Korean media, however, makes another comeback highly unlikely. So far, such a public purging has befallen only those who were permanently banished from public life.