Election etiquette has been abandoned as final phase of voting approaches 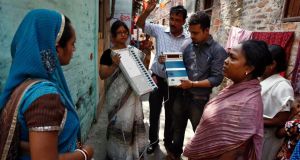 Polling officials demonstrate to residents how to use an electronic voting machine in Kolkata yesterday. Photograph: Rupak De Chowdhuri/Reuters

The showdown between the ruling Congress Party and its principal challenger, the opposition Hindu nationalist Bharatiya Janata Party (BJP), has become increasingly bitter ahead of the eighth and penultimate round of polling today in India’s general election.

The final phase of voting in the brutally contested poll takes place next week, before results are declared on May 16th.

“India is done with this [Nehru-Gandhi] dynasty. India has had them for over 60 years. It’s time for the poor and the dispossessed to rise to the top,” Modi told a large crowd at Amethi, 600km from New Delhi, on Monday.

Breaking with etiquette
By addressing the rally at Amethi, seat of the Congress Party heir apparent Rahul Gandhi, his rival for the premiership, Modi was breaking with long-established Indian political etiquette by which top politicians stay off each other’s home turf.

But in the pitiless campaigning for 438 parliamentary seats where voting has already taken place since polling began on April 7th, political niceties are being disregarded as electioneering for the remaining 169 seats increasingly becomes personalised.

Rahul Gandhi, who is spearheading the flailing Congress campaign, has represented Amethi for a decade. Family members including his father Rajiv, who was assassinated by a suicide bomber in 1991, have repeatedly been elected from Amethi, giving the family a monopoly on the seat since the 1960s.

The Congress Party that has ruled India for nearly 50 years since independence from colonial rule in 1947, is synonymous with the Nehru-Gandhi clan that has provided the country with three prime ministers: India’s first prime minister, Jawaharlal Nehru; his daughter Indira Gandhi; and her son Rajiv. His widow, Sonia, has since 1998 headed the Congress Party, which has led the federal coalition since 2004.

Television star
However, this time around the BJP is fielding Smirit Irani, an upper-house MP and popular television star to challenge Gandhi’s supremacy in Amethi. “The government of mother [Sonia] and son [Rahul] is about to go. Nobody can save it now,” Modi told the Amethi rally.

His assessment is backed by successive opinion polls predicting that the scandal-tainted, Congress Party-led government is heading for its worst defeat. Modi said Sonia and Rahul never thought the son of a tea vendor would challenge them, referring to the humble beginnings from which he rose to become chief minister of India’s western Gujarat province in 2001, a post he still holds.

“Is it a crime to be born into a poor family? Is it a crime to sell tea? They made me into a criminal,” Modi railed, alluding to the 2002 riots in Gujarat that lasted more than eight weeks and in which more than 1,000 people, mostly Muslims, were killed.

Modi was accused by the federal Congress Party administration of colluding in the Muslim pogrom, a charge not substantiated by several inquiry commissions; but the perception of his involvement lingers.

Dummy candidates
Several political parties are fielding “dummy” candidates with names similar to the principal contestants in an attempt to fool voters into mistakenly selecting the wrong person on the electronic voting machines.

The larger political parties scout for namesakes of prominent contestants and fund their election expenses in order to pit them against rivals in constituencies where a few hundred votes can swing the result.

Popular Bollywood actor Hema Malini, contesting in the holy Hindu city of Mathura, is up against two other Hema Malinis, for example, while veteran politician Amarinder Singh faced a similarly confusing challenge in northern Punjab province, where voting was held on April 30th. Even Modi briefly faced a similar prospect from a namesake in his Vadodra constituency in Gujarat before his potential rival withdrew.

The election commission has been trying to monitor such contestants, although the practice is not illegal. “We put up a list of all contesting candidates next to their symbols outside every polling booth for awareness,” said Neeraj Bharat, Delhi’s additional chief electoral officer.

“But it really boils down to the real candidates exposing the proxies,” he added.