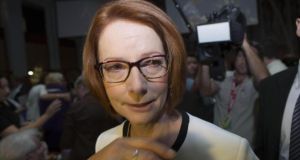 Australian prime minister Julia Gillard has promised to crack down on abuse of the 457 visa scheme, which allows foreign workers to fill specific skills gaps in Australia. Photograph: Andrew Taylor/AP


Rupert Murdoch has denounced the Australian government as “disgraceful and racist” over a foreign worker visa programme used by about 10,000 Irish people.

Labor Party prime minister Julia Gillard last month promised to crack down on abuse of the 457 visa scheme, which allows foreign workers with specific skills to fill gaps in Australia.

Ms Gillard pledged to put “Aussie workers first” and “to stop foreign workers being put at the front of the queue with Australian workers at the back”.

On a visit to his homeland, the News Corporation chairman told Sky News Australia the government was “pretty disgraceful and racist” in its comments. “I’m a big one for encouraging immigration; I think that’s the future, and a mixture of people, just look at America, it’s just fantastic,” Mr Murdoch said.

“You have difficulties [with] the first generation of migrants sometimes if there’s too many from one area, but they meld [in] a couple of generations and it leads to a tremendous creativity in the community.”

Labor frontbencher David Bradbury said there was “nothing racist about standing up for jobs and job opportunities for Australians”.

But business groups and the opposition Liberal Party say abuse of the 457 scheme is not widespread. Liberal immigration spokesman Scott Morrison said Ms Gillard’s attack on the 457 visa was a “naked grab for votes and a naked pledge to the union movement, which has taken control of immigration policy”.

Mr Murdoch’s comments follow a concerted attack on the government by his newspaper group in recent weeks.

News Ltd, which publishes seven of Australia’s 12 major metro daily newspapers (controlling 70.5 per cent of the market), led a campaign against the government’s media regulation proposals last month. The proposed reforms fell through after failing to win enough support from independent MPs.

Australia’s federal election takes place in September. On current polling Labor will lose in a landslide.