More than a million super-rich in China, report finds

Many of the tycoons work in IT, biotechnology and alternative energy sectors 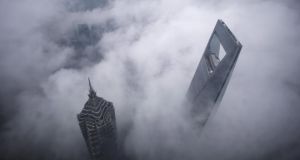 The Jin Mao Tower and the World Financial Centre of Shanghai: the city is home to more than 50,000 of China’s super-rich, as is the case in Beijing and the provinces of Jiangsu, Zhejiang, Shandong and Sichuan. Photograph: Aly Song/Reuters

China, the world’s second-largest economy, may not be growing as quickly as it was a couple of years ago but its number of super-rich keeps rising strongly and it is now home to more than a million high-net-worth individuals, a new report said.

A large number of the new breed of tycoons come from innovative industries such as IT, biotechnology and alternative energy, and about 80 per cent of this legion of new wealthy are aged under 50.

The super-rich are defined as having more than 10 million yuan (€1.48 million) of investable assets, and there were 1.04 million of them at the end of last year, according to the annual China Private Wealth Report, which is compiled by the China Merchants Bank and the Bain & Company consultancy.

China’s economic growth slowed to about seven per cent in the first quarter of this year.

The biggest number of wealthy individuals, with more than 100,000, is in Guangdong province in the south, which is home to the country’s manufacturing industries and adjoins Hong Kong. But there are also more than 50,000 each in Shanghai and Beijing, as well as the provinces of Jiangsu, Zhejiang, Shandong and Sichuan.

“China’s high-net-worth individuals are driving the growth of the country’s real economy, particularly in key innovative sectors, which is helping to fuel the economy and advance innovation,” Alfred Shang, a partner at Bain and co-author of the report, told the Shanghai Daily.

“Among the newly rich we’re seeing a more aggressive investment style, openness towards alternative investments and increased focus on wealth creation, second only to wealth preservation as their primary wealth-management objectives,” he said.

The fastest growth has been in central and western China, traditionally the poorest parts of China, but which have been the focus of government initiatives to boost the economy, such as the One Belt, One Road project and the Yangtze River Economic Belt policy.

Increase in number of wealthy

The report includes a survey of 2,800 wealthy Chinese individuals and shows many are choosing to put their money overseas. Nearly 40 per cent said they held overseas investments, compared with 19 per cent in 2011, and about half said they planned to increase their investments abroad.