Maldives newspaper raided after claims of corruption against leader

Journalists flee ahead of posting of documentary critical of president online 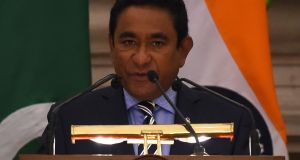 Authorities in the Maldives have raided the offices of a newspaper and a human rights NGO and cancelled the passports of fugitive opposition figures after an al-Jazeera documentary aired corruption allegations against the country’s president, Abdulla Yameen.

Local journalists involved with the documentary, broadcast by the Qatari news network on Wednesday evening, had already left the country in anticipation of a backlash, amid warnings by senior politicians that contributors risked jail under defamation laws.

Hours after the documentary was posted online on Wednesday, police raided a building in the capital, Malé, housing the Maldivian Independent, a newspaper accused of links to the former president Mohamed Nasheed’s Maldivian Democratic Party (MDP).

Mr Nasheed was ousted in what supporters say was a coup in 2012 and is now living in exile in Britain while a 13-year jail sentence hangs over him in his home country.

Also in the seven-floor building were offices belonging to an MDP-linked law firm, a travel agency and a human rights NGO.

The Guardian understands that two men, neither of them employed by the newspaper, were arrested and accused of terrorism and plotting to the topple the government. They were released but will be questioned on Thursday. The police warrant also listed possible charges of inciting discord and threatening public order.

The Maldivian Independent, whose former editor Will Jordan led the al-Jazeera report, reported that a number of floors in the building were searched. It said seven officers spent 15 minutes searching its bureau, but left without confiscating anything.

She said: “We’ve had one of our journalists disappear, a machete attack on our door, and our security cameras vandalised, so we’ve had to relocate once before. It’s not a safe place for journalists at all.”

The Maldives broadcasting commission released a statement on Wednesday claiming it had received complaints about the documentary and warning that those who broadcast its allegations were liable for defamation.

A month ago the Maldives introduced strict laws making defamation a criminal as well as a civil offence, meaning those found guilty could be jailed for up to six months.

The move was criticised by David Kaye, the UN special rapporteur on freedom of expression, as a “direct attack on the exercise of the right to freedom of expression in the Maldives” that “will have a strong chilling effect on media and civil society, making reporting and criticism truly risky”.

Ahmed Nihan Hussain Manik, the majority leader of the governing party, warned on state TV last month that citizens who assisted in spreading “falsities” in the report would have to “bear responsibility for it”.

Ms Rasheed said local media outlets were unsure whether they would be penalised for reporting the allegations in the documentary. “A lot is up in the air right now,” she said. “My reporters are worried about my safety, so we’ll wait and see what kind of reaction there is before I go back.”

A spokesman for the president told local media that al-Jazeera’s allegations were baseless, while a member of Mr Yameen’s Progressive Party of the Maldives described the documentary as “a camel’s fart”. Another said its claims were “nothing new”.

Al-Jazeera had broadcast the documentary despite requests for more time to respond to the allegations, it said. “[This] is evidence that this report was aimed at bringing the government into disrepute, to defame senior government officials, and to pressure the government to act in a manner wanted by a certain group of people.”

It said a number of the allegations had been previously investigated by the country’s auditor-general, and there were ongoing investigations into others.

The government also announced on Wednesday that it was cancelling Mr Nasheed’s passport and those of other opposition party members.

Mr Nasheed, who was granted political asylum in the UK in May, was accused last week by the finance ministry of “misusing” state funds while in office. He said the loss of his passport was a “ridiculous and politically motivated” attempt to distract from the corruption accusations aired against Mr Yameen on Wednesday.

Mr Nasheed, a respected climate change and human rights campaigner, was elected president that year, but says he was forced out of office at gunpoint in 2012, triggering huge protests and four years of political crises.

He was convicted of terrorism last year in a trial that Amnesty International said was politically motivated.

Mr Yameen, Mr Gayoom’s half-brother, became president in disputed elections in 2013 but has struggled to fend off persistent rumours of an imminent coup, most recently aired in the last fortnight, when opposition groups in exile met in Colombo to discuss how he might be removed.

His former vice-president Ahmed Adeeb, whose leaked phone data reportedly provided the basis for Wednesday’s al-Jazeera report, was convicted in June of trying to assassinate Yameen by planting a bomb on his speedboat.

Mr Gayoom, the former leader, has fallen out with his half-brother and formed a breakaway faction of their party, making for bitter politics in Malé, at odds with the idyllic resorts a speedboat ride away.