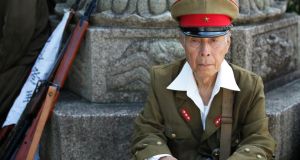 For most of the year the loudest sound at Yasukuni shrine is the buzzing of cicadas and the shuffle of old people’s foot- steps to the hushed main hall.

In mid-August, however, as Japan marks a string of painful anniversaries climaxing with the end of the second World War, it erupts into a noisy demonstration of bruised national pride.

Shrine visitors in the baking summer heat run the gauntlet of petitions on everything from a boycott of Japan’s liberal flagship, the Asahi newspaper, to a rewrite of the country’s “biased” history textbooks.

Yasukuni, enshrining Japan’s wartime leaders as well as more than two million soldiers, has long been one of Asia’s political lightening rods. Millions of people consider it a monument to war, empire and Japan’s undigested militarism.

Japan lost more than three million people in the war, including some half a million killed in a vicious aerial bombing campaign by the US that culminated in the incineration of Hiroshima and Nagasaki.

The nationalists at Yasukuni focus on this domestic calamity and not on the 20 million people who died across Asia during Japan’s imperial rampage.

Japanese prime minister Shinzo Abe dipped his toes back in these controversial waters last December when he made a pilgrimage to Yasukuni, triggering angry protests from China and South Korea, and even a rare diplomatic slapdown from Washington.

Yesterday, the 69th anniversary of the day emperor Hirohito announced to a stunned nation Japan’s surrender, Abe pointedly stayed away, opting instead to send an “offering”. Two of his cabinet, however, showed up.

Abe’s strategy on the shrine is a “delicate dance”, said the Asahi, between trying to stop tattered ties, mainly with China, from worsening further, “while upholding a conservative ideology that takes a less apologetic tone towards Japan’s wartime past”.

Undoubtedly Abe and his supporters would have preferred if he had been at Yasukuni yesterday. But he can take solace from the fact that Japan appears to be moving more in his direction than the Asahi’s.

Across the country, as veterans of the war pass away, a slow, insidious erasing of memory seems to be taking place. The latest institution to fall victim is the publicly funded Osaka International Peace Centre, which has been told this week to “drastically” reduce displays dealing with Japan’s wartime aggression, according to the Japan Times.

School boards have demanded that libraries remove copies of the manga Barefoot Gen, an anti-war classic about the 1945 atomic bombing of Hiroshima.

The board of giant national broadcaster NHK includes revisionists such as Naoki Hyakuta, a novelist who says he wants to restore Japanese pride and who denies evidence of the 1937 Nanjing massacre, when Japanese troops raped and murdered thousands of civilians.

‘Real history of the war’

Many of yesterday’s pilgrims to Yasukuni view Hyakuta as a hero. “It is time that Japanese children studied the real hist- ory of the war,” says finance worker Makoto Suzuki, sweat- ing in the midday sun. “Hyakuta’s books are wonderful.”

Many pilgrims are less happy with Abe, who they think should have come to the shrine. Reports this week suggest the prime minister has his eyes on a long-delayed summit with Chinese president Xi Jinping and wants to avoid starting another diplomatic fire.

As a minimum requirement for such a meeting, however, Beijing is demanding two cond- itions: that Tokyo recognise a territorial dispute with China over the Senkaku/Daioyu islands; and that he pledge to stay away from Yasukuni.

Most analysts believe such a pledge would be politically impossible for such an avowedly nationalist prime minister. Suzuki says Abe will never agree to it. “We expect him to visit soon,” he says. “But even if he doesn’t, Yasukuni will be here long after he has gone.”