A murder, refugees and disputed lands are backdrop to a costly meeting in Ise-Shima 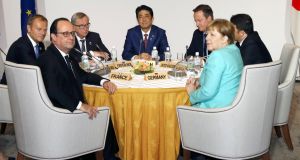 It has become something of an annual cliché: the fixed smiles of the world’s most powerful men and women engaging in an uncomfortable-looking photo op. Yesterday, the G7 leaders grabbed spades in the humid heat to plant trees at Ise shrine, the holiest site of Japan’s Shinto religion.

Television showed pictures of the leaders walking though the shrine grounds with a white-robed priest, explaining the history of the mythical sun goddess Amaterasu, enshrined at Ise. Those TV pictures were as close as most reporters got to US president Barack Obama and the other six leaders.

For most of the event, correspondents from around the world sit in a hanger-like press centre waiting for briefings from bureaucrats, and swatting away the stream of press releases from NGOs. Stuck for compelling copy, local journalists spend most of the day asking foreign counterparts for their “impression” of the summit.

In reality, they are anything but. Germany, backed by Britain, has so far stuck to its standard argument that there can be no sustainable economic global growth without tight government budgets. Host Japan and the United States want more spending to prop up anaemic growth.

The final communiqué is likely to follow the lead of the G7 finance ministers, who last week said each government should essentially go its own way.

Japan and close ally the US found themselves unexpectedly at odds, even while stressing the strength of their alliance. Obama’s trip is overshadowed by the arrest of a former US marine for the killing of a young woman on Okinawa, which reluctantly hosts most of Japan’s American military bases.

With one eye on his domestic audience, Japan’s prime minister Shinzo Abe has been unusually blunt in his condemnation of the murder, declaring himself “speechless” at what he called this “absolutely despicable crime”. Obama, on his final G7, was hoping to keep his visit focused on a pilgrimage to Hiroshima.

Most worryingly of all for an alliance founded from the ashes of the second World War, Okinawa’s assembly yesterday called for all marines to leave. The island has endured years of US military-related crime. Forced on the back foot, Obama apologised to the family of the 20-year-old victim.

The leader of the world’s second-biggest economy, China, is not even here, except sotto voce, denouncing the proceedings. Yesterday, the state-run Xinhua news agency said the G7 should “mind its own business” after Japan repeated its opposition to “acts that try to change the status quo by force” – code for Chinese military expansion in the South and East China Seas.

These world gatherings started in the 1970s as an attempt to put together a collective response to the oil shock. Over the years they have become bloated affairs, increasingly under fire for wasting money and resources, the bill swelled by the cost of sending over 20,000 police officers to protect seven people.

The thousands of attendees are fed in a cavernous restaurant serving free sushi, sashimi and sake. The leaders’ buffet, including produce from across Japan, was a “meaningful opportunity to promote the appeal of Japan’s food culture to the world”, said Japan’s foreign ministry.

The bulging press pack included snacks, more sake, a calligraphy pen, and a CD promoting tourism, most of which, like the eventual conclusions of the summit, will probably be discarded as soon as the event is over.