‘It will be like Angry Birds,’ militant protester says, as university stand-off continues 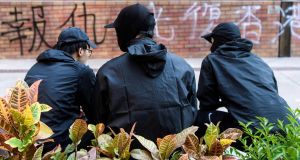 Protesters sit in an open area at the campus of the Hong Kong Polytechnic University in the Hung Hom district of Hong Kong on Wednesday. Photograph: Anthony Wallace/AFP via Getty Images

Hardline protesters holed up in a Hong Kong university siege for four days have threatened to detonate homemade explosives if police storm the campus.

“This is a technical university. There are so many materials here. Gas, chemicals, so many. If they come in we can just set them off,” one man nicknamed CK said.

“The police should stay away from the campus. This is a university. It is illegal for them to enter. If they want to run in, we can give them a surprise. We have many fire magicians,” he said, referring to people with knowledge about explosives.

“It will be like playing Angry Birds,” he said.

After a fierce battle with police outside the campus on Sunday lasting more than 10 hours, hundreds of protesters barricaded themselves into the Polytechnic University. Police fired more than 3,000 tear gas canisters into the compound, and deployed water cannon to continually douse it in a blue dye laced with liquid tear gas.

By Wednesday night, hundreds of the protesters had surrendered, exhausted and many in need of medical attention.

As the numbers dwindle, now down to about 50, police are maintaining a rigid cordon around the perimeter. First aid workers, school representatives and some media outlets have been allowed occasional access, and on Wednesday night The Irish Times went in to talk to some of those holding out.

With shards of glass everywhere, burned tables and chairs stacked high, supplies strewn across the tiles and pungent petrol fumes in the air, the campus feels like it has already been bombed.

Standing in the university canteen, surrounded by mounds of leftover food, rubbish and unwashed plates and pans, CK said he is now desperate.

“Over five years the situation has just got worse and worse, no matter what we do. We had peaceful protests for years. No use. F*** the government! F*** the police! We’ve had enough,” he said.

Standing beside him, Yu had an American flag draped around his shoulders. “The police are evil. They deserve trouble. They caused all this,” he said.

He was wearing the flag because he thought the United States would support them, he said.

In the university concourse, there were numerous primed petrol bombs among the singed detritus, some of them adhered to small gas canisters, but there was no sign of anything resembling explosives around the entrances.

“They could be hidden anywhere,” CK said, “it’s a big university.”

Police did try to storm up the steps into the main university concourse at 5.30am on Monday, but they were driven back by a barrage of firebombs.

Neither CK nor Yu are students. CK works in construction, Yu said he did odd jobs. Their tone was notably more militant compared to three students outside.

Using yellow and white hard hats, they had spelled out a giant S.O.S. in the courtyard.

“It’s a message for anyone out there who can help. We need help,” one young student said.

“I just want to go back home. I don’t know how,” he said, “I am scared that the police will just rush inside and beat us all up.”

Like many others, he tried to escape several times. A few shimmied down ropes from a footbridge and were whisked away on waiting scooters, but the police closed off that route within seconds. Some others went down manholes and crawled through the sewerage system past the police cordon, but again, that option was quickly discovered and sealed.

On Wednesday night two young boys decided they had enough and skirted the perimeter, frantically looking for a safe channel out. They had changed out of the trademark protester black, now wearing white T-shirts, hoping to blend into the busy streets if they could only get beyond the ring of police.

But every time they peered above the parapet, a silver police visor was staring right up at them.

As one craned his neck to look through a hole in a half-melted yellow barricade, he was belted in the face by a high torch-beam from below.

“Come on down,” the policeman taunted.

His friend squatted by a stack of charred chairs and buried his face in his hands.

What started nearly six months ago as a peaceful protest against a proposed extradition Bill has ballooned into an increasingly violent anti-government movement.

After the million-plus marches in June, protesters sent out clean-up and recycling teams to ensure the streets were spotless after the big events.

Things are very different now. After being occupied for 10 straight days, and under siege for four, the university presents an apocalyptic vision.

The plummet into anarchy was not the protesters’ fault, Joe said.

“The escalation of violence has to do with the government not responding to the citizens’ voices,” he said.

Now, as he nervously ponders his options as the siege moves into day five, he said his family have two messages for him: