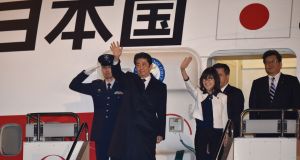 With $12.50 – half a month’s salary – in his pocket, Harold Mainer was about to go ashore to celebrate his friend’s birthday. Then, just before 8am, came the angry buzz of hundreds of Japanese warplanes, swarming the sky and raining destruction. The surprise attack on the US naval base at Pearl Harbor had begun.

President Franklin Roosevelt declared it “a date which will live in infamy”, and soon the US would be embroiled in the second World War. But Mainer, who survived the Helena being torpedoed and used a water hose to wash away the remains of a fallen comrade, reflects: “We knew war had started before he declared war. We knew they weren’t going to get away with it.”

Seventy-five years after the raid that left 2,403 Americans dead and 19 vessels sunk or crippled, American and Japanese heads of state are to stand together at Pearl Harbor in Hawaii for the first time. Barack Obama and Shinzo Abe, the Japanese prime minister, will visit the USS Arizona memorial on Tuesday to honour those killed and, says the White House, “showcase the power of reconciliation”, though Abe is not likely to offer an apology.

The event comes seven months after Obama became the first American president to travel to Hiroshima, where the US dropped an atomic bomb in 1945 – the other bookend of the war in the Pacific. Among the dwindling band of veterans, not all have been disposed to endorse such gestures but Mainer, for one, is content for Abe to set foot in Pearl Harbor.

“If that’s what he wants to do, that’s all right with me,” he said, attending a commemoration in Washington on the recent 75th anniversary of the attack. “I don’t know what to say. I have no anger.

“I was talking to a school one time and there was a little eight-year-old boy. He says, ‘Can I ask you something?’ I said, ‘Yeah, sure.’ He asked me my feelings about the Japanese people. It threw me. I thought to myself and said: ‘I tell you what, them Japanese sailors felt they were right, the same as I felt I was right, but I said in the end it proved that I was right. He was satisfied with it and everybody else was satisfied with it, and I thought that was about as a good an answer as I could give.”

Symbolism has been a key part of the Obama presidency – for example, his visit to Cuba earlier this year. He promised a “pivot to Asia” during his eight years in office with mixed results. The Trans-Pacific Partnership, once declared by Abe as a crucial “pillar” of future US influence, has been doomed by the election of Donald Trump as his successor.

But the US-Japan relationship could be more important than ever as Trump spars with the region’s biggest power, China. His phone conversation with the leader of Taiwan threatened to upend relations with Beijing, whereas his first face-to-face meeting with a foreign leader following his election was with Abe.

Abe will not, as had been initially reported, be the first Japanese leader to go to Pearl Harbor. In 1951, the then prime minister, Shigeru Yoshida, visited the US national cemetery in Honolulu and the US military command centre facing Pearl Harbor. Abe, though, will be the first Japanese leader to pay tribute at the memorial to the sunken USS Arizona and to be accompanied by the American president.

There is overwhelming support among the Japanese public for Abe’s visit: according to a Kyodo News poll at the weekend, 85.3 per cent agreed that he should go to the site, while 10.9 per cent disagreed.

Koichi Nakano, professor of Japanese politics at Sophia University in Tokyo, believes the visit is an attempt by Abe to underscore the strength of the US-Japan alliance “before Trump, who is a potentially destabilising factor, assumes office”.

Nakano added: “The fact that he is visiting Pearl Harbor without offering an apology makes it look like he is merely using the historic site for political purposes.”

Abe’s critics say he appears willing to make conciliatory gestures to US audiences, while resisting demands to do the same from Japan’s former enemies in Asia. South Korea and China have long insisted that Japan has yet to properly apologise for its wartime conduct, and have accused Abe of attempting to rewrite the darker episodes of his country’s wartime history.

He has, for example, denied that tens of thousands of “comfort women”, mainly from the Korean peninsula, were coerced by the Japanese imperial army into working as sex slaves in frontline military brothels. At a joint session of the US Congress in April last year, he offered “eternal condolences” for the loss of American lives during the war and acknowledged that Japan had caused “suffering to the peoples of Asian countries”, but did not mention specific wartime atrocities.

In August that year, he marked the 70th anniversary of the end of the Pacific war with an expression of “deep remorse”, but stopped short of issuing a fresh apology, adding that future generations of Japanese should not be “predestined” to apologise for the actions of militarist governments during the first half of the 20th century.

“The Japanese people have long since accepted the notion that Japan was defeated by the US – but not by China,” Nakano said.

“Even the conservatives have largely come to accommodate the fact that they were given a second chance in the post-war period by the US victors. So, for the prime minister to visit Pearl Harbor is a non-issue in Japan. On the other hand, apologising to China and Korea, visiting Nanjing or meeting former ‘comfort women’ would be infinitely harder for him to do.”

Jeff Kingston, director of Asian studies at Temple University, agreed that Abe hoped to put the past behind both countries and “create positive momentum as he enters an unpredictable relationship with Trump”.

“It is mostly about the photo op, but given Abe’s revisionist views on history that glorify imperial Japan and exonerate it from wartime misdeed, he is not the most credible messenger on reconciliation.”

Obama’s visit to Hiroshima in May “conveyed remorse because of his public stance against nuclear weapons, while Abe’s record of rehabilitating the wartime past means that his presence does not convey a similar sincerity and contrition,” he added.

At the time, Trump, then a presidential candidate, tweeted:

“Does President Obama ever discuss the sneak attack on Pearl Harbor while he’s in Japan? Thousands of American lives lost.”

A Japanese government official, who did not wish to be named, said Abe’s visit reflected his desire for reconciliation and to reiterate his belief that the US and Japan must continue to build an “alliance of hope” in the face of new regional threats from China and North Korea.

At a recent briefing in Washington, White House press secretary Josh Earnest struck a similar note. Asked if some veterans might be angered if Abe did not apologise, he replied: “Yes, there may be some who feel personally embittered. But I’m confident that many will set aside their own personal bitterness, not because they’re personally satisfied by the words of the prime minister, but because they recognise how important this moment is for the United States. And that’s certainly why they qualify to be described as the greatest generation.”

It was a comment that could comfortably be applied to Mainer, the 95-year-old veteran from Charleston, Arkansas. He said of Abe: “I don’t criticise him. I don’t think he needs to apologise. I wouldn’t want Harry Truman to apologise for what he did. If it hadn’t been for Pearl Harbor, there wouldn’t have been an atomic bomb.”

Mainer lost many shipmates that day – it was the deadliest attack on US territory until September 11th, 2001 – and was on the Helena when it was torpedoed again by the Japanese in July 1943, watching it sink from a life raft and waiting four hours for rescue. But he holds no rancour as Abe and Obama seek to bury the last ghosts.

“I don’t feel hard at them; I don’t want them to feel hard at me,” he said philosophically. “It was a long time ago. You learn to live with it and forget about it. I think time has the forgiveness part of it. I stayed over there 49 months and I had a lot of time to think. Holding grudges doesn’t help it; it hurts you more than them, and I’ve learned to live with that.” – (Guardian service)