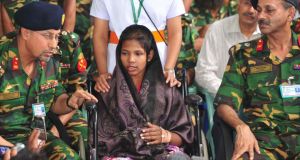 Reshma Begum, 19, rescued from the rubble of the Rana Plaza building 17 days after the building collapsed, speaks during a media conference as salvage workers neared the end of their search for victims of the collapse of a factory building. Photograph: Khurshed Rinku/Reuters

Three weeks after a building collapse in Bangladesh that killed more than 1,100 workers, the retailing giant H&M - the largest purchaser of garments from that country - agreed today to sign a far-reaching and legally binding plan that requires retailers to help finance fire safety and building improvements in the factories they use in Bangladesh.

Consumer and labour groups hailed the move by H&M, based in Sweden, as an important step toward improving factory safety in Bangladesh, saying it would increase pressure on other Western retailers and apparel brands to do likewise.

Minutes after H&M announced its move, Inditex, a large Spanish apparel company best known for its Zara brand and stores, also agreed to sign onto the safety plan, labour groups said. Penney’s operator Primark also said it was committing to signing the accord.

It also calls for retailers to stop doing business with any factory that refuses to make necessary safety improvements, and for workers and their unions to have a substantial voice on factory safety.

Ever since the collapse of the Rana Plaza building on April 24th on the outskirts of Dhaka, Bangladesh’s capital, H&M, Wal-Mart, Gap and other companies have faced intense pressure to sign the agreement.

Until today, only two other companies had: PVH, the parent company of Calvin Klein and Tommy Hilfiger, and Tchibo, a German retailer.

In announcing its move, H&M said that “in order to make an impact and be sustainable,” the agreement “would need a broad coalition of brands.

” A company statement said the agreement committed a company to the goal of a safe and sustainable garment industry in Bangladesh “in which no worker needs to fear fires, building collapses or other accidents that could be prevented with reasonable health and safety measures.”

“Fire and building safety are extremely important issues for us and we put a lot of effort and resources within this area,” said Helena Helmersson, head of sustainability at the retailer. “With this commitment we can now influence even more in this issue.”

Primark also said it was committing to signing the accord. Under the agreement signatories commit to “ financing and implementing a joint fire and building safety programme. This will include safety inspections, remediation and fire safety training at supplier factories,” the company said in a statement.

“Primark is very pleased to support this initiative. The company has consistently believed that the collaborative approach facilitated through this agreement was the most likely initiative to bring effective and sustainable change for the better to the Bangladeshi garment industry,” a company spokesman said.

H&M and Gap were the target of an online petition that obtained more than 900,000 signatures and was sponsored by Avaaz, a human rights group. The petition said, “Your companies and other multinationals profit from cheap labour, and can do much more to reduce the dangers of the places where your products are made.”

“H&M’s decision to sign the accord is crucial,” said Scott Nova, executive director of the Worker Rights Consortium, a Washington-based factory monitoring group backed by 175 American colleges and universities.

“They are the single largest producer of apparel in Bangladesh, ahead even of Wal-Mart. This accord now has tremendous momentum.”

Gap has resisted the plan, objecting to its legally binding nature and saying it was already doing a lot on its own, having hired a fire inspector and promised $22 million for factory improvements.

Bangladeshi labour groups that have sifted through the Rana Plaza rubble have not found any evidence that H&M or Gap had garments made at any of the five factories in the building.

But numerous investor, religious, consumer and labour groups are pressing other companies known to have obtained apparel from the factories there - Benetton, Cato Fashions, the Children’s Place, el Corte Ingles and Loblaw - to sign on to the safety plan.

Bangladesh is the world’s second-largest apparel exporter, after China, and also has the lowest minimum wage in the world - $37 a month. Its low wages and lack of regulation have helped it attract billions of dollars in orders from Western retailers and apparel brands.

In a meeting sponsored by the German government that H&M, Wal-Mart and other retailers held with IndustriALL and other labour and nongovernment organizations two weeks ago, IndustriALL set a deadline of this Wednesday for retailers to sign on to what has often been called the PVH-Tchibo plan.