Grandmother accused of mass murder: ‘I don’t remember anything’ 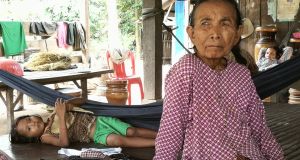 We find her, a bird-like figure in a stained orange wrap skirt and pink blouse, nursing a swollen hand at her stilted house in a village near the Thai border. Her tired, glaucous eyes, dark-brown rimmed with blue, watch us with suspicion.

Two of her grandchildren stop their work of shelling black beans to observe us approach. A daughter spies us idly from a hammock. A lot of people came here asking questions, the old woman tells us, but prime minister Hun Sen told them to stop. What do we want?

This is Im Chaem, a grandmother who until recently faced charges of crimes against humanity, including mass murder, enslavement and extermination. A United Nations-backed tribunal accused her of running a prison in northwest Cambodia where some 40,000 people died in the late 1970s.

As a Khmer Rouge official, it was alleged, she also oversaw the construction of dams, part of the regime’s irrigation plan to increase rice production. Early this year the judges dropped the charges, a move critics said undermined the tribunal’s credibility and raised questions about interference by the government, which opposed the prosecution.

Im Chaem sits alongside her grandchildren and listens to our questions. “No, I don’t remember anything from back then. I’m old – 76,” she says gently but firmly, swinging her sandalled feet like a schoolgirl and running a hand along a worn handbag at her side. “You should ask the people in the ministries, in the government, about all that.”

You might not remember, I tell her, but many others remember you from those times. “I’m just living my life, a quiet life now,” she retorts, turning away and frowning into the distance.

She lives a charmed life among her daughters and grandchildren, tending to her jackfruit and papaya trees and to three plump cows that far outsize the scrawny cattle seen elsewhere in the village. Her husband “comes and goes”, she says, then nods at her 14-year-old granddaughter. “This one doesn’t want to go to school. She’s worse than the cows out there.”

She throws back her head and laughs, revealing a full set of healthy teeth, rarely seen in Cambodians her age. They’re stained blood-red from chewing betel nut.

The tribunal was established in 2006 as a joint project between the UN and Cambodian government, but there were constant disputes over whom to prosecute as the government blocked efforts to try anyone besides the regime’s senior leaders. More than a decade later, at a cost of more than €250 million, it has convicted three people.

Some two million died at the hands of the Khmer Rouge.