Despite weather respite, fears grow of disease outbreak among 725,000 in relief camps 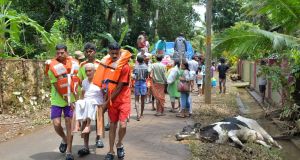 A dead cow lies on a roadside as an elderly woman is carried to safety from flood waters by Kerala and Tamil Nadu Fire Force personnel in Annamanada village in Thrissur District, in the south Indian state of Kerala. Photograph: Manjunath Kiran/AFP/Getty Images

Torrential rain finally let up in India’s flood-hit Kerala state on Sunday, giving some respite for thousands of marooned families, but authorities feared an outbreak of disease among about 725,000 people crammed into relief camps.

Incessant downpours since August 8th have caused the worst floods in a century in the southwestern state, and close to 200 people have perished in the rising waters and landslides.

The India Meteorological Department forecast heavy rainfall in only one or two parts of Kerala on Sunday and withdrew a red alert in several districts.

Using boats and helicopters, India’s military led rescue efforts to reach people in communities cut off for days, with many trapped on roofs and upper floors, in desperate need of food and clean water.

A Reuters photographer on a naval helicopter said water levels had receded in villages around the city of Kochi.

Rescue teams were focused on the town of Chengannur on the banks of the Pamba river, where about 5,000 people are feared to be trapped, officials said.

Kerala’s chief minister, Pinarayi Vijayan, said the total number of people taking refuge at the 5,645 relief camps had risen to 725,000.

Thirteen deaths were reported on Sunday, he added, taking the total number confirmed to nearly 200.

He said the department was preparing to deal with a possible outbreak of water-borne and air-borne diseases in the camps.

Kerala, which usually receives high rainfall, has seen more than 250 per cent more rain than normal between August 8th and August 15th. State authorities have had to release water from 35 dangerously full dams, sending a surge into the main river.

As the rain abated on Sunday morning, 60-year-old TP Johnny visited his home in Cheranelloor – a suburb of Kochi situated on the banks of the Periyar river – to see when he and his family could return.

“The entire house is covered with mud. It will take days to clean to make it liveable. All our household articles, including the TV and fridge have been destroyed,” he said.

The beaches and backwaters of Kerala are top destinations for domestic and international tourists, but far fewer visit during the monsoon season.

Kochi’s airport is closed due to waterlogging, and Jet Airways has arranged additional flights from Thiruvananthapuram for passengers holding confirmed tickets from Kochi.

India’s national carrier, Air India, will operate ATR flights from the naval airport in Kochi to Bangalore and Coimbatore, starting on Monday.

Late on Saturday, the chief minister said there was no shortage of food in the state as traders had stocked up before a local festival.

“The only problem is transporting it,” he told reporters. “The central government and public have co-operated well in this effort to fight this disaster.”