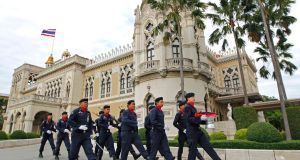 Human rights groups have voiced concern in the run up to Thailand’s controversial constitutional referendum, saying a ban on campaigning and a crackdown on dissent is preventing Thais from making an informed choice and potentially handing an advantage to the country’s military.

More than 40 million voters will head to the polls on 7th August to give their verdict on proposed changes to the constitution that will, is approved, give increased power to the ruling military junta.

However, in the run-up to the vote, the junta passed a new law forbidding campaigning on the issue and also launched a crackdown on activists and the media.

Last month, Amnesty International warned that the Thailand’s controversial Referendum Act, which enshrined a possible 10-year jail sentences for anyone who defies it, was “unjustifiably restricting rights in advance of the referendum”.

More than 20 ambassadors from Europe, US and Canada also issued a public statement last month expressing joint concern about the ruling National Council for Peace and Order’s (NCPO) suppressive actions.

Article 61 of Thailand’s Referendum Act has been specifically targeted for harsh criticism from human rights groups, with its severe penalties applying vaguely to “anyone who disseminates text, pictures or sounds that are inconsistent with the truth.”

Sunai Phasuk, Human Rights Watch’s senior researcher for Thailand, said such an atmosphere “does not allow Thai voters to make an informed choice”.

In place of open, public debate, the Election Commission of Thailand (ECT) has instead relied on promulgating summaries of the draft provisions on TV, radio, online and in leaflets.

While they are supposed to be neutral and independent summarisations, Sunai said: “I had the chance to read the publication and it is clearly biased. It is along the lines of NCPO propaganda. . . In a way the ECT ends up being part of the (vote yes) campaign, while on the other hand we see almost daily suppression of the No vote.”

For Chiranuch Premchaiporn, director of local news site Prachatai, the vague remit of the ban on campaigning has hindered her staff members’ ability to effectively report on the constitution.

“Compared to previous votes, this is much different,” she said, highlighting a growing sense of fear and self-censorship amongst both reporters and their subjects.

One month ago, Prachatai felt the full weight of the Referendum Act when one of their journalists was arrested and charged while covering the Vote No campaign of the anti-junta New Democracy Movement.

“We are hoping they drop the charge.” Chiranuch said.

Two weeks ago, Peace TV, a TV station supporting the ousted premier Yingluck Shinawatra, was banned from broadcasting for 30 days, thereby missing the immediate build up and aftermath of the referendum.

Despite the strict new laws, some activists are determined to oppose the new constitution.

Rangsiman Rome, co-founder of the New Democracy Movement, said he is actively campaigning against the constitution, despite the risks.

“The draft process has had no civilian involvement.” He said, referencing the ruling military NCPO appointed drafting committee.

As a result of distributing leaflets opposing the constitution, Rangsiman and more than a dozen of his activist friends have already found themselves in violation of the Referendum Act and are now facing possible 10-year long prison sentences.

Criticism of the NCPO’s expansive suppression of dissent has been a growing concern since the junta and its leader, prime minister Gen Prayuth Chan-ocha, came into power shortly after Yingluck Shinawatra’s removal in the 2014 military coup.

However, with the long-vaunted constitutional referendum approaching, the NCPO hope a victory deliver a mandate to kick-start their “roadmap to democracy”.

Yet where criticism has been permitted, it has been focused unremittingly on the content of the constitution itself.

Upon the draft charter’s public release in late March, a number of provisions immediately alarmed observers across political divides. Both Yingluck’s Pheu Thai party and their opposition Democrat party have publicly rejected the charter, citing articles which would weaken the elected lower house of parliament while extending the influence of the military.

The junta, meanwhile, has voiced a belief that the draft would provide the country with the means to operate with more stability, while combatting the endemic corruption that plagues the country’s politics.

“[The constitution] essentially enshrines the abuse of power and impunity,” Sunai said, highlighting the NCPO’s ability to appoint all 250 seats of the Upper House of Thailand’s Parliament. “With [those provisions], it doesn’t matter what else it says about the promotion and protection of human rights because that would not supersede the actions of the NCPO.”

“What they are doing is they look at Prayuth and decide ‘Do I like what he is doing, or not?’ That is what this is about.”