A long-time ally of Kyrgyzstan, Turkey has Fethullah Gülen links in its sights 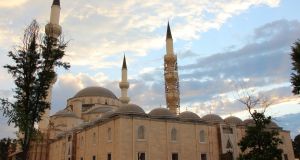 The huge €22 million replica of Istanbul’s Blue Mosque being built by Turkey’s presidency of religious affairs in central Bishkek, 3,700km from the Turkish city, is a stunning tribute to one of the world’s great buildings. Surrounded by modest single-storey homes, it’s also entirely out of place.

Mosques in Kyrgyzstan’s capital, a rambling city of 900,000 people, and throughout this central Asian country, are traditionally ornate, quaint buildings, in obvious contrast to the 35-acre New Central Mosque complex. But more than its sheer size, the mosque is one of Turkey’s brashest attempts to extend its Islamic-tinted soft power into central Asian countries including land-locked Kyrgyzstan, a moderately conservative former Soviet state.

Now, with the Turkish government laying blame for a failed coup d’etat on July 15th that saw the parliament bombed, air strikes on civilian areas and as many as 300 people killed squarely at the door of the US-based cleric Fethullah Gülen, Kyrgyzstan finds itself the focus of Ankara’s wrath.

A total of 36 schools, educational institutes and a university operating throughout mountainous Kyrgyzstan are run by the Sebat Educational Foundation, an academic organisation that promotes and follows the social conservative tenets of Islam espoused by Gülen, an internationally popular Turkish preacher who has lived in self-imposed exile since 1999.

One of Sebat’s most prestigious selling points is the International Ataturk-Alatoo University, a fee-paying college of 2,000 students founded in 1996, and with a western-educated faculty. For Ankara, its popularity and reach is a big concern.

“If there is a coup in Kyrgyzstan, then it will be carried out by the Feto,” said Turkey’s foreign minister Mevlut Cavusoglu last week, referring to an acronym Ankara uses to describe the so-called Gülen network. “They have infiltrated all institutions. Kyrgyzstan is our brother nation. We need to immediately share our intelligence with them.”

So far, evidence of Gülen’s involvement in the failed coup has amounted to confessions by renegade soldiers detained since July 15th, whose conditions of imprisonment have worried rights groups such as Amnesty International. Gülen has denied any involvement.

Kyrgyzstan has said it won’t comply with Turkey’s demands to close down institutions such as Sebat, setting the stage for conflict between these once-close allies. At the sixth-storey offices of Sebat’s Kyrgyzstan operations, not far from Bishkek’s Soviet-style central Alatoo square, copies of the once-pro-Gülen Zaman newspaper now controlled by the Turkish authorities litter the foyer.

According to Halim Nezihoglu, vice-rector of the International Ataturk-Alatoo University (IAAU), the biggest and oldest Gülenist-inspired university in the country, enrolment remains strong, despite the bad press originating from Turkey.

“Two Turkish universities have cancelled their agreements to exchange students with us, but those programmes had yet to begin,” he said.

Securing licensing from the Kyrgyz ministry of education means Sebat’s operations are independent of the Turkish education system, said Nurhan Kudaibergenov, the general director of Sebat in Kyrgyzstan.

Most of its staff and lecturers are Turkish citizens and because of this and its media portrayal, Gülen-oriented organisations such as Sebat are erroneously labelled as Turkish.

Kudaibergenov says there has to date been no direct pressure from the Turkish embassy in Bishkek or from Ankara. “In the few days following the coup attempt, we had parents calling to ask if the schools were staying open, and to offer their support for us against the Turkish government; we’ve had writers, the whole of Kyrgyzstan’s intelligensia voice their support for us,” he said. “But we’ve had no contact from Turkey or the Kyrgyz authorities, no intervention except for the comments from [Turkey’s] prime and foreign ministers.”

Ties between Ankara and Bishkek have traditionally been cordial. Turkey was the first to recognise Kyrgyzstan as an independent state in 1992, following the collapse of the Soviet Union, and the Turkic nations have been eager to build upon ties strengthened in part by Erdogan’s visit to Bishkek in 2013.

Kyrgyzstan’s recent public unrest that saw 2,000 killed and its president ousted in 2010 perhaps ought to make it more sympathetic to the Turkish government’s demands, but a lack of solid evidence and the fact the Gülen-linked schools are popular has curbed that.

Observers say Ankara’s actions illustrate Erdogan’s desire to establish a neo-Ottoman union centred on Turkey but drawing on economic cohesion – and diplomatic backing – from other Turkic countries in central Asia such as Kyrgyzstan, Azerbaijan, Turkmenistan, Kazakhstan and Uzbekistan.

Some among the more than 140 countries that host Gülen-linked charities and foundations, such as Kazakhstan, have held out against pressure from Turkey to close them.

For followers of Gülen’s teachings in Kyrgyzstan, however, striking questions surrounding the events of July 15th remain. “Within hours of the coup starting, Mr Gülen was being blamed by Turkish leaders – it was too early to know,” said Ibrahim Koncak, a lecturer in political science at IAAU. “Mr Erdogan is trying to send a message . . . that if one country closes down the Gülen schools then severe pressure will come down on those in Turkey.”