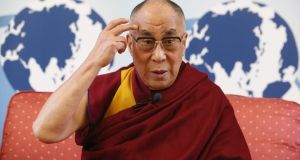 The Dalai Lama: The movement that he leads is experiencing massive stresses, and his peregrinations in Europe are just as important to him as they are for us.

Northern Ireland is a long way from Tibet. But watching the Dalai Lama cross Derry’s Peace Bridge last Thursday, one could be forgiven for imagining that the two worlds were, in fact, intimately related.

The Dalai Lama clearly has much inspiration to offer to Northern Ireland. However, the movement that he leads is experiencing massive stresses, and his peregrinations in Europe are just as important to him as they are for us.

The Dalai Lama is the head of the Yellow Hat sect, the 14th reincarnation of his office, and a “living Buddha”. As a child philosopher-king, he received gifts sent from Franklin D Roosevelt, but made only desultory pushes for Tibet’s claims to sovereignty.

In 1951, the Chinese Communist Party (CPC) broke Tibet’s isolation, occupying the plateau. Some 25 per cent of all Tibetan males were monks, and the Chinese were ardent atheists, but efforts were made by both sides to accommodate the other. The Dalai Lama went so far as to meet with Chairman Mao Zedong in Beijing. As Tibetans began to be assimilated into CCP’s matrix of “brotherly nationalities”, the Dalai Lama fled in March 1959, and has since led a government-in-exile based in Dharmsala, India.

Today, Tibetan-majority counties and regions are spread all over western China, an area targeted for heavy infrastructural investment. In Lhasa, the CCP pulls up stones worn smooth by decades of pilgrim prostrations, replaces them with new sidewalks and shopping malls, and expects gratitude. Similarly, the Chinese force nomads into new housing clusters that make surveillance easier. Police stations are built inside of monastic compounds and army soldiers do target practice within earshot of holy sites. Development is abetted by Chinese settlers, a new train from mainland China and a host of new airports.


Writers censored
Tibetan writers are heavily censored; the most admired are sent to jail. Cultural erosion and “bilingual education” skewed toward Chinese is a particular sticking point. Two per cent of all men are monks, and they first need to undertake a secular state education. Riots are repressed. There are no discussions about the Dalai Lama’s return. The response by some Tibetans to these trends has been to bathe in gasoline and burn themselves to death in public spaces, more than 100 in the past two years.

The rise of self-immolations by Tibetans indicates that the Dalai Lama’s line for peaceful protest is beginning to erode. These acts, undertaken primarily by young Tibetans, underscore the attractions of more dramatic forms of protest. It is indeed shocking to speak with young Tibetans in China, who in one breath will laud the Dalai Lama and, in the next, talk about the need for gallant armed struggle against the occupiers.

Like the hunger strikers during the Troubles, the youth engaged in such protests have brought attention to underlying problems, but they also open up serious questions: What is the actual effect of the protest on the dominating adversary? How many martyrs does a given struggle need? The protesters simply want the Dalai Lama to return to Tibet, and the Chinese to leave, but these are inchoate sentiments not to be confused with actual strategy.

Beijing has responded with increased policing, and harsh punishments for those who abet the protesters. Beijing’s propaganda tags the Dalai Lama as the source of the self-immolations, asserting that he is directing a Tibetan resistance movement inside of China’s borders with the help of US and Indian intelligence organisations. It is difficult to have a reasonable conversation on these topics in Beijing.

Countries that allow the Dalai Lama to visit are occasionally held up for scorn, particularly when civic leaders meet with “His Holiness”. Mayors in Paris as well as Portland, Oregon, have been the targets in recent years of Chinese campaigns to stop so-called “splittist” activity, which can be defined as anything from meeting with the Dalai Lama to celebrations of non-communist-approved Tibetan culture.

Accordingly, during the Derry visit, Martin McGuinness and Peter Robinson were nowhere to be seen, surely mindful of their upcoming trade mission to China.


Impasse
The Dalai Lama is in Derry to celebrate dialogue, but his own movement is at an impasse. There are few viable paths forward for negotiations with Beijing, and the CCP seems to be waiting for the Dalai Lama’s death to step in and create a split in the search for his child successor. Radicalism is increasingly attractive to Tibetan youth.

Amid the complex passions of Northern Ireland’s identity politics, the Dalai Lama rings a bell of clarity and appeals for calm. But there are storm clouds over Tibet.


Adam Cathcart is a lecturer in Asian history at Queen ’s University Belfast.