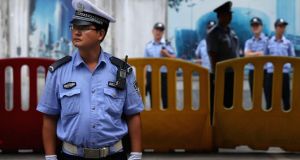 Chinese police have arrested nearly 1,000 suspected members of a religious cult known as the Church of Almighty God, or Eastern Light, as part of a major crackdown, state media has reported. Photograph: Getty

Chinese police have arrested nearly 1,000 suspected members of a religious cult known as the Church of Almighty God, or Eastern Lightning, as part of a major crackdown on the banned sect, state media reported.

The cult, which claims to have millions of members, “cheats people, illegally collects money and violates the law under the guise of religion,” the police said, quoted by the official Xinhua news agency.

“A series of acts by its members have harmed people’s lives and property and disrupted social stability.”

The arrests came after five members of the group were charged with beating a young woman to death in a McDonald’s restaurant in Shandong for refusing to give her mobile phone number, while they were allegedly trying to recruit her. Their trial begins this week.

The Church of Almighty God, also known as Eastern Lightning, was set up in the early 1990s by Zhao Weishan, a physics teacher from Heilongjiang province, according to Chinese state media.

It was banned by Chinese authorities in 1995, after which Zhao fled to the US, and in late 2012, authorities arrested more than 450 people accused of belonging to the group after they held secret gatherings and spread leaflets in the apparent belief the world was going to end on December 21st that year.

Adherents to the cult believe that Jesus Christ was reincarnated as a woman surnamed Deng from central Henan province. They also claim to be on a mission to fight and slay the “big red dragon,” or China’s ruling Communist Party.

The police said that members of the cult “were responsible for numerous suicides and murders, in which many victims were the perpetrators’ family members,” and that local Communist Party and government departments were now “trying to convince less devoted members to shake off the cult ideology and return to normal life.”

Beijing does not allow new religions outside the streams of the Communist approved versions of Buddhism, Taoism, Islam, Catholicism and Protestantism.

Chinese authorities are particularly wary of cults, which can grow in power and turn into national rebellions. Both the Boxer and Taiping rebellions in 19th century China had their origins in groups with spiritual or mystical components.

The crackdown is reminiscent of a similar one on the Falun Gong spiritual movement, as the two movements hail from the same part of China and have many similar characteristics.

China has labelled the Falun Gong an “evil cult” that encourages suicide, makes people neglect severe medical conditions and takes their savings. The authorities carried out a nationwide crackdown in 1999, putting thousands of members behind bars.

1 Orange weather alert issued as Storm Jorge set to batter Ireland
2 Coronavirus: One case confirmed in Northern Ireland
3 Clonlara case study: ‘Who the hell gave planning down here, day one?’
4 Predictions of ‘skin and hair flying’ as FG selects 13 of up to 60 Seanad hopefuls
5 Coronavirus: reinfection discovery may be blow to vaccine hopes
Real news has value SUBSCRIBE