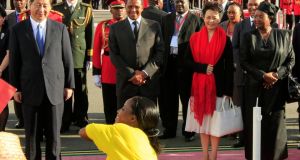 
China’s new president Xi Jinping will feel as he returns from an eventful maiden overseas trip that he has done his bit to reassure African countries about China’s intentions in the continent.

Essential to the future success of China-Africa ties was the need to show that Beijing was interested in more than just natural resources and opening up new markets for Chinese goods. China dare not be seen as a neo-colonial power disguised as a Communist emerging nation, and Mr Xi’s effusive rhetoric during his visit underlined this.

“The development of China-Africa ties can only be in present continuous tense, and never in present perfect tense,” Mr Xi told African leaders during his visit, which included Tanzania, South Africa, where he attended a summit of the world’s leading developing nations – Brazil, Russia, India, China and South Africa, the so-called Brics, and finally the Republic of Congo.

“We are ready to work with African countries to push our ties to a higher level and expand them to a broader area,” Mr Xi enthused.

At the start of the trip, Mr Xi had been in Russia, where he was feted by the Putin government. This was very much a visit aimed at showing that there was a group of powerful nations not allied to the US or other western powers.

China overtook the US and Europe as Africa’s largest trading partner in 2009 and has maintained its leading place in the following years. China now accounts for 20 per cent of Africa’s exports.

Sino-African trade with Africa has been expanding with the trade volume for 2012 reaching €154 billion, while China's cumulative direct investment in Africa exceeded €11.5 billion.

In Africa, China has put itself forward as an alternative to western partners, offering trade deals and infrastructure loans without preconditions involving human rights or governance reform.

“China will continue to offer, as always, necessary assistance to Africa with no political strings attached,” Mr Xi said to applause. “We get on well and treat each others as equals.”

Mr Xi was able to underline his words with some useful financial packages, promising to make good on a promise of $20 billion (€15 billion) of credit to Africa within three years, and keep up infrastructure development, both transnational and transregional.

The Chinese message focused on the 18,000 Chinese medical personnel who have worked in African countries, treating 250 million patients.

There have been complaints about trade imbalances, abuse of workers by Chinese employers in Zimbabwe and corruption charges in Zambia, and mining conditions are often held up for scrutiny.

Mr Xi’s African tour ended in Republic of Congo, from where China imported 5.4 billion tonnes of oil last year, just 2 per cent of its total oil imports, but potentially the source of a lot more.

A broader platform for the China-Africa relationship was the Brics meeting, held in Durban this year.

While these five countries probably disagree on more than they agree, what they do share is a feeling that the big developing nations are underrepresented on international organisations and lack co-ordinated muscle when it comes to dealing with global financial crises, that often affect their populations particularly acutely.

The Brics agreed to create a development bank to help fund their $4.5 trillion infrastructure plans, which amounts to a direct challenge to the World Bank, which developing countries have long accused of western bias.