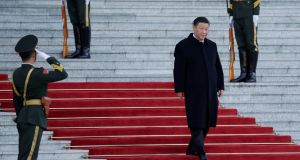 Chinese president Xi Jinping has warned party officials to brace themselves for the ‘struggles’ that lie ahead. Photograph: Reuters/Jason Lee

The Chinese Communist Party, with Xi Jinping Thought at its core, needs to lead everything from “east, west, south, north and in the centre”.

That was the central message encapsulated in the 5,000-character communiqué released following the party’s Central Committee’s four-day, closed-door plenum in Beijing this week.

The document, which championed China’s system of governance and outlined plans to modernise and increase the party’s capacity, “reads a bit like a top-level roadmap for a highly functioning authoritarian superpower”, wrote analyst Bill Bishop in his Sinocism newsletter.

Beijing’s overworked rumour-mill was busy emitting whispers lately that Xi Jinping’s leadership might be coming under pressure with party elites, who were tiring of his increasingly authoritarian ways and his mismanagement of issues ranging from Hong Kong to the US trade war. But if that inner-party discontent does exist to any significant extent, there wasn’t a glimmer of it on show at this all-important plenum.

“Seek truth from facts, as they say in Beijing,” Bishop said, “and right now the facts as I can observe them are not pointing towards a weakened [president] Xi.”

In the overall hierarchy, Xi Jinping and six other members of the Politburo Standing Committee are at the top of the nation’s totem pole. And then, about once a month, they join the full 25-member Politburo for cabinet-style discussions.

The Central Committee – made up of 202 full members and 169 alternate members – meets for a plenum at least once a year. Behind closed doors at these plenary sessions they get to thrash out policies with the Politburo before they go to the annual National People’s Congress in or around March, a gathering of 3,000 delegates that is generally seen as rubber-stamping decisions already made.

At the last plenum the party abandoned presidential term limits, meaning Xi can stay at the helm indefinitely. This year a special session focused on the theories inherent in “Xi Jinping thought on socialism with Chinese characteristics for a new era”. The meeting did not chart major new policies, but underscored his leadership and authoritarian style, and stressed the party’s irreplaceable role in society.

The committee did acknowledge, however, that these were troubled times, and the country now faces “a more complicated situation with risks and challenges significantly increasing at home and abroad”.

That echoes what Xi has been saying recently, as he has repeatedly warned party officials to brace themselves for all the “struggles” that lie ahead, and condemned “weak-kneed” cadres who are “unwilling to fight” against the party’s growing challenges.

Bringing the People’s Liberation Army into the spotlight, the Central Committee said they must “firmly establish the guiding position of Xi Jinping’s strong military thinking in national defence and army building”. It was essential, the statement said, to “improve the party’s absolute leadership over the armed forces and ensure they will faithfully fulfil their missions”.

Beijing often threatens that Taiwan will be one of those priority missions if it does not give up its separatist ways. As the island prepares for a general election in January, one that will be dominated by cross-straits issues, the communiqué said in a vague manner that the government would “advance the process toward the peaceful reunification of China”.

Also adopting vague but threatening language towards Hong Kong, the committee said it would “improve the legal system and enforcement mechanism to defend national security” in the financial hub, suggesting they might invoke legal powers to quell the city’s ongoing pro-democracy demonstrations.

Questions of identity are at the root of the Taiwan and Hong Kong issues, and the communiqué calls for the development of a deeper cultural and national identity, one that is built on the Chinese Communist Party’s brand of socialism.

“We must strengthen our cultural self-confidence, firmly grasp the direction of the advanced socialist culture, inspire the vitality of the national culture, and build a Chinese spirit, Chinese value, and Chinese power,” it said.

Selling that message widely in Taiwan and Hong Kong will be a struggle in these climes, indeed, but it is one that resonates with the leading government officials, military and operators of the state-owned enterprises in Beijing.

After seven years at the helm, Xi is not currently looking to undertake major reforms, but rather to consolidate the party’s control and his position at its centre. Despite the turbulent atmosphere in China these days, he has emerged from this conclave unshaken, and still very much the party’s core.