Former secretary of state denounces the “inexcusable” detention of the women 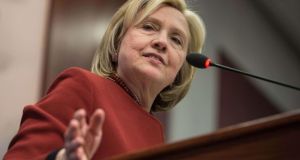 Former US secretary of state Hillary Clinton tweeted: “The detention of women’s activists in #China must end. This is inexcusable.” Photograph: Nicholas Kamm/AFP/Getty Images

China has told Hillary Clinton to mind her own business after the former US secretary of state took to Twitter to denounce as “inexcusable” the detention of five feminist activists.

Ms Clinton tweeted: “The detention of women’s activists in #China must end. This is inexcusable.” This prompted an irritated response by the Chinese government, which tends to reject foreign criticism of its human rights policies as external interference.

“China is a country ruled by law. Relevant departments will handle the relevant case according to law. We hope that public figures in other countries can respect China’s judicial sovereignty and independence,” foreign ministry spokesman Hua Chunying told a daily news briefing.

The women – Li Tingting, Wei Tingting, Wang Man, Zheng Churan and Wu Rongrong – were detained on the weekend of International Women’s Day, March 8th, on suspicion of “picking quarrels and provoking trouble”, a charge that carries a jail sentence of up to five years.

There were fears that they were planning a nationwide campaign against sexual harassment, part of a broader crackdown on dissent under Chinese president Xi Jinping.

Mrs Clinton’s remarks will have resonated as it was 20 years ago this year that she made a landmark speech at the United Nations’ fourth World Women’s Conference, which was held in Beijing.

“It is time for us to say here in Beijing, and for the world to hear, that it is no longer acceptable to discuss women’s rights as separate from human rights,” Mrs Clinton told the gathering.

Meanwhile, Samantha Power, the US ambassador to the UN, told the New York Times: “If China is committed to advancing the rights of women, then it should be working to address the issues raised by these women’s rights activists – not silencing them.”

In some areas, women’s rights in China have come a long way since 1949, but strict control of dissent means that feminist public displays of dissatisfaction are treated with a heavy hand.

The arrests came around the time of the annual Chinese parliament, the National People’s Congress, which this year passed a draft law against domestic violence.

Mrs Clinton, who is seen as the front-runner for the Democrats in the 2016 presidential election, has long been critical of China’s human rights record.