Chinese President Xi Jinping watched more than 12,000 soldiers, mostly Chinese but with contingents from Russia and elsewhere, as they marched down Changan Avenue, Beijing. Video Reuters 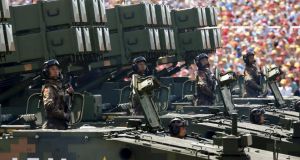 Anti-tank missiles are displayed at the military parade in Beijing on September 3rd, 2015. Photograph: Damir Sagolj/Reuters 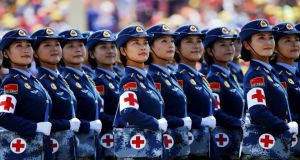 Military nurses look from atop a truck towards the Chinese president. Photograph: Damir Sagolj/Reuters 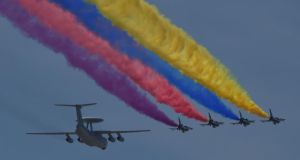 China put on a muscular display of military might in a parade in Beijing to mark the anniversary of Japan’s defeat in the second World War 70 years ago and underline the country’s emergence as a regional power.

Dressed in a charcoal grey suit, cut in the traditional style favoured by Chairman Mao Zedong and other leaders, President Xi Jinping drove from Beijing’s Tiananmen Square down Chang’an Avenue to inspect 12,000 troops and an impressive array of military hardware in an open-top car, hailing the troops with the Communist military address: “Hail, comrades!”

The parade gave president Xi an opportunity to present his idea of a “Chinese Dream” of a rejuvenated country taking its place among the nations, welcome after weeks of less flattering headlines following its economic woes and the deadly explosions in Tianjin.

“This great triumph crushed the plot of the Japanese militarists to colonise and enslave China and put an end to China’s national humiliation of suffering successive defeats at the hands of foreign aggressors in modern times,” he said.

Western leaders largely avoided the event because they felt it was anti-Japanese and that the Beijing government was using the parade to crank up nationalism.

The US and its allies are uncomfortable with China’s ambitions in the region, especially in the South China Sea.

It has been 70 years since the Allied victory in what is known as the Chinese People’s War of Resistance Against Japanese Aggression and World War Two, as it is officially known here.

Over the course of 14 years between 1931, when the invasion began, and the end of the war in 1945, China suffered more than 35 million military and non-military casualties.

Mr Xi said the victory also re-established China as a major country in the world and won the Chinese people respect of all peace-loving people around the world.

“This great triumph opened up bright prospects for the great renewal of the Chinese nation and set our ancient country on a new journey after gaining rebirth,” he said.

The parade takes place as economic growth is ebbing to its lowest rate in three decades and the stock market has turned uncomfortably bearish.

On parade were over 12,000 troops, more than 200 planes and helicopters and around 500 pieces of military equipment, including tanks, rocket launchers and missiles of all sizes and ranges. As a major arms supplier, the parade is closely watched and China says 84 per cent of the gear is being shown in public for the first time.

The PLA’s main battle tank, the MBT-3000, was one of the stars of the show, as it matches cutting-edge technical specifications but is cheaper than overseas rivals.

Of particular interest are the strategic weapons, such as bombers and missiles, were wheeled out. The PLA’s missile corps is called the Second Artillery and of particular interest is the Dongfeng 21-D, the intermediate-range, anti-ship ballistic missile capable of taking out an aircraft carrier.

They will also be watching the Dh-10 cruise missile and upgraded DF-31A and DF-41 intercontinental ballistic missiles, and the parade may give insight into how these weapons are delivered.

The parade unveiled the H-6K bomber, which is based on the former Soviet Cold War-era Tu-16 and can apparently launch cruise missiles from the air, something only the Russians and the Americans can do right now.

The parade came as the Pentagon said that five Chinese navy ships were spotted operating in the Bering Sea, off the coast of Alaska, the first time the US military has seen such activity in the area.

Perhaps aware of fears in the West and among China’s neighbours about the country’s remarkable rise of recent years, President Xi stuck a conciliatory tone elsewhere in his speech.

“We Chinese love peace. No matter how much stronger it may become, China will never seek hegemony or expansion. It will never inflict its past suffering on any other nation,” he said.

He also said that China would cut the number of its troops by 300,000 from 2.3 million now as a sign of the country’s peaceful intentions.

President Xi was accompanied by his wife Peng Liyuan, who wore a red dress and carried a purse, as he greeted foreign dignitaries from North Korea, Vanuatu, Vietnam, Venezuela and the Czech Republic -- President Milos Zeman was the only senior EU representative -- inside the Forbidden City complex.

There was a warm welcome for South Korean President Park Geun-hye but the most effusive welcome of all was reserved for Russian President Vladimir Putin.

President Xi was beaming as he shook hands with the Russian leader, whose authoritarian style of leadership he is known to admire.

These days, China needs natural resources from Russia, while Russia wants Chinese help as it undergoes sanctions over its actions in Ukraine, and both share a common mistrust of the United States, which has also fuelled warmer ties.

There were also some old faces in evidence, perhaps as a sign of unity within the ranks of the ruling Communist Party.

There were surprised, but pleased, gasps when former President Jiang Zemin, who is said to still wield influence in the Politburo, was seen, confidently grasping the balustrade, and President Xi namechecked Mr Jiang’s “Three Represents” policy during his speech.

There there was astonishment when former Premier Li Peng, who is still nicknamed the Butcher of Beijing for his role in the crackdown on the student-led democracy movement in 1989, came out on the balcony.