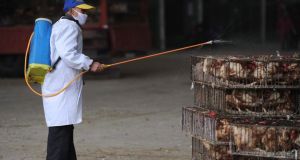 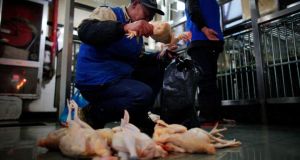 A man puts a chicken inside a plastic bag at a food market in downtown Shanghai today. Chinese authorities have slaughtered over 20,000 birds as the death toll from a new strain of bird flu has mounted to six. Photograph: Carlos Barria/Reuters

Chinese authorities have slaughtered over 20,000 birds at a poultry market in Shanghai today as the death toll from a new strain of bird flu mounted to six, spreading concern overseas and sparking a sell-off in airline shares in Europe and Hong Kong.

The local government in Shanghai said the Huhuai market for live birds had been shut down and 20,536 birds had been culled after authorities detected the H7N9 virus from samples of pigeons in the market. Other live poultry markets in the city will be closed down from tomorrow, it said.

At least four of the dead are in Shanghai, a city of 23 million people and the showpiece of China's vibrant economy.

The latest death was of a 64-year-old man in Zhejiang province, state news agency Xinhua said on Friday, adding that none of the 55 people who had close contact with him had shown symptoms of infection.

Shanghai authorities stressed the H7N9 virus remained responsive to the drug Tamiflu and those who were diagnosed early could be cured.

"We currently have enough reserves of Tamiflu to meet with the current outbreak," Wu Fan, director of the Shanghai Center for Disease Control & Prevention, told a news conference.

Tamiflu is made by Roche Holding AG.

Airline shares tumbled in European markets on fears the outbreak could become widespread. The STOXX Europe 600 travel and leisure sector index fell by 3.5 per cent.

In Shanghai, the rising death toll prompted some residents to stay away from markets with live chickens and ducks.

"I'm only getting my groceries at the large supermarkets now because I don't think it is safe to visit the wet markets anymore," said 38-year-old Shao Linxia, adding she had also stopped buying poultry since news of the bird flu surfaced.

"We all remember SARS and how quickly it could spread, so we are obviously worried."

The 2002-2003 epidemic of Severe Acute Respiratory Syndrome (SARS) started in China and killed about one-tenth of the 8,000 it infected.

Still, there were few signs of panic in Shanghai with shops remaining open, and the strain does not appear to be transmitted from human to human.

"We have 14 cases in a large geographical area, we have no sign of any epidemiological linkage between the confirmed cases and we have no sign of sustained human-to-human transmission," said World Health Organization spokesman Gregory Hartl before the two new cases were confirmed.

"The 400 contacts are being followed up to see if any of them do have the virus, have had it from someone else," he told a news briefing in Geneva.

In Japan, airports have put up posters at entry points warning all passengers from China to seek medical attention if they have flu-like symptoms.

In the United States, the White House said it was monitoring the situation and the Centers for Disease Control and Prevention said it had started work on a vaccine if it was needed. It would take five to six months to begin commercial production.

The US Food and Drug Administration (FDA), which regulates medicines, said it was working closely with international and national health authorities.

"As part of the larger (US) government response, FDA would also work with drug and vaccine developers to expedite development and availability of any potentially effective vaccines," a spokeswoman said.