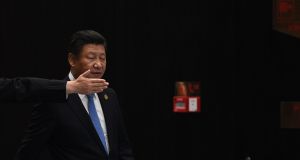 An usher gestures as China’s President Xi Jinping arrives to deliver his closing statement at the G20 summit in Hangzhou last week. Under Mr Xi, China has seen increased persecution of human rights lawyers and civil society reformers, with tighter control of the internet and the media. Photograph: Johannes Eisele/AFP/Getty Images

China’s Communist Party-run courts have strengthened their system of legal checks and balances and are making progress on human rights, despite ongoing criticism about rule of law violations, the country’s cabinet has said in a White Paper.

Improvements include tightening up of judicial procedures to prevent illegally obtained evidence and upholding principles of innocence until proven guilty, according to the State Council document.

“China has revised the Criminal Procedure Law, and implemented principles of legality, in dubio pro reo, exclusion of unlawful evidence,” ran the document called New Progress in the Judicial Protection of Human Rights in China, which was published in state media.

The document pointed to recent advances such as fitting interrogation rooms with recording equipment to prevent torture, and also the introduction of China’s first anti-domestic violence law.

“Meanwhile, the judicial accountability system has been improved, while judicial transparency promoted to ensure the right to know and the right to supervise for concerned parties and the public,” it said.

Under President Xi Jinping, China has seen increased persecution of human rights lawyers and civil society reformers, with tighter control of the internet and the media, leaving little leeway for individuals and groups to influence public policy and air grievances.

July marked the anniversary of the “709 Crackdown”, which saw 248 people detained, many of them working for law offices defending activists, which Mr Alston described as “a pincer movement designed to systematically narrow and control the space for citizens to express discontent over matters such as land rights, workers’ rights and environmental threats”.

Activists are typically convicted on charges of state subversion, a vaguely worded term that has caused much concern among legal experts in the West.

China has also introduced a raft of tough new laws of late, including legislation restricting foreign NGOs, an anti-terrorism law and a national security law.

“The death penalty is under strict control and is employed with prudence,” it said, adding that it applied only to a “very small number of extremely serious criminal offenders”.

The Dui Hua Foundation in San Francisco has estimated the number of executions in China in 2013 at 2,300.

China had abolished the death penalty for non-violent economic crimes in 2011, and an amendment in 2015 abolished the death penalty for nine other areas of crime, including smuggling arms and ammunition, counterfeiting currency, forcing others into prostitution and obstructing military personnel in the performance of their duties. The amendments also extended the possibility of reprieve in cases of capital sentence.

“When the supreme people’s court reviews a death penalty case, it focuses on interrogating the defendant in accordance with the law, and listening to opinions of the defence counsel,” the document said.

1 Coronavirus: One more death in Republic as expert warns house parties are ‘disaster’ for containment
2 George Floyd death: Man shot and killed by law enforcement in Kentucky
3 Gardaí disperse crowds gathered at coastal beauty spots
4 Six counties free of new cases of Covid-19 over past week
5 How lockdown has helped us to save money - and find new ways to spend it
Real news has value SUBSCRIBE