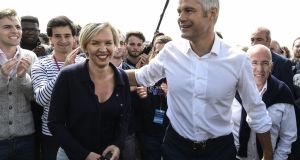 Laurent Wauquiez, the political heir of former president Nicolas Sarkozy and a representative of the hard right, is likely to be elected president of the conservative Les Républicains (LR) in December.

Wauquiez (42) has been the interim president of LR since its candidate, François Fillon, lost the presidential election last April.

“The right is back” was the slogan printed on the lectern when Wauquiez delivered his first campaign speech before 1,500 supporters in a giant white tent at Mount Mézenc in Auvergne on Sunday.

“In France, there is only Jupiter [a nickname for Macron] and [the far left leader Jean-Luc] Mélenchon,” Wauquiez said. “The right will rise again. Monsieur Macron, a little modesty. You don’t walk on water and French history didn’t start with you.”

Mélenchon’s France Unbowed party did not speak to “the France that works”, Wauquiez continued. “The only real alternative” would be “the right that is truly right-wing”.

He cannot attack Macron’s economic measures, most of which have been advocated by the right, so he accused the president of being soft on Islam. “We must not give another inch to radical Islam,” Wauquiez said. “France is not a juxtaposition of communities. France is a shared destiny.”

A photograph of Wauquiez standing Napoleon-like with his right foot raised on a rock was widely published by French newspapers. Le Monde’s cartoonist portrayed him as a wind-up doll controlled by Sarkozy.

Like Sarkozy before him, Wauquiez claims to defend the middle-class, the “France that works”. He promised to lift taxes on overtime hours, a measure enacted by Sarkozy but rescinded by the subsequent socialist administration.

Since he was elected president of the Auvergne-Rhône-Alpes region in December 2015, Wauquiez has courted controversy. A year ago, he called on French mayors to join the “resistance” against government plans to relocate migrants from the Calais “jungle” refugee camp throughout the country. He rejected plans to raise the number of migrants in his eight million-strong region from 400 to 1,800.

Wauquiez refused to carry out a national plan for training jobless people on the grounds that it constituted “handouts”.

The fall in Macron’s popularity appears to have encouraged Wauquiez. Macron’s aides say he’s an ideal opponent, because he scares away moderate, centrist voters.

Sarkozy and former prime minister Alain Juppé, LR’s most moderate leader, were eliminated in the presidential primary last year. Neither Xavier Bertrand nor Valérie Pécresse, both presidents of regions who carry weight in the party, are willing to challenge Wauquiez in the leadership contest. But Pécresse will found her own micro-party, Libres, on September 10th. She told France-Inter radio that LR could split if Wauquiez crosses certain “red lines”, in particular in dealing with the extreme right-wing Front National (FN).

Pécresse recalled that Marion Maréchal Le Pen, the grand-daughter of FN founder Jean-Marie Le Pen, said the FN “could do business with” Wauquiez. Florian Philippot, a vice-president of the FN, said he’d like to have coffee with Wauquiez.

“I heard Laurent Wauquiez say [US president Donald] Trump is inspiring,” Pécresse said. “He doesn’t inspire me. If we run after the FN, it won’t be the right I belong to.”

Referring to LR voters who chose FN leader Marine Le Pen in the presidential election, Wauquiez said, “Doesn’t anyone see that we need to win back the 35 per cent of these people who are not extremists, who are not fascists, and who we lost?”

Wauquiez hopes his new alliance with Juppé’s former deputy, Virginie Calmels, will reassure more moderate conservatives. At the rally in Auvergne, Calmels mocked the pro-Macron Constructifs group in the National Assembly as “opportunists”. Her former associates in Juppé’s entourage say the same thing about Calmels.