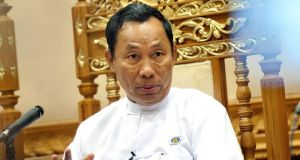 Burma’s parliamentary speaker Shwe Mann: he angered the military by supporting an attempt in parliament in June to amend the constitution to limit the military’s political role. Photograph: Ye Aung Thu/AFP/Getty Images

The feud between the two old rivals became public in a dramatic way late on Wednesday evening, when security forces surrounded the vast headquarters of the ruling Union Solidarity and Development Party (USDP) in the capital, Naypyitaw.

The United States expressed concern about the apparent use of security forces to help resolve the dispute.

Shwe Mann’s ouster from the party follows rare discord within the establishment over the role of the military, which handed power to a semi-civilian government in 2011 but retains an effective veto over changes to the political system.

Shwe Mann had built ties with Nobel laureate and opposition leader Aung San Suu Kyi, who has called repeatedly for the military to withdraw from politics. He angered the military by supporting an attempt in parliament in June to amend the constitution to limit the military’s political role.

It is unclear what the changes mean for reforms in Burma, which was renamed Myanmar in 1989, but the heavy-handed involvement of the security forces smacks of the junta-era approach to political disputes.

“They are using security apparatus to affect a reshuffle in the party. They should have settled this some other way rather than using brute force. This is a reminder of the very unhappy past.”

Shwe Mann was replaced as chairman of the party because he was busy in his role as speaker of parliament, the USDP said in a statement on Thursday that made no reference to the role of the security forces. President Thein Sein “transferred the role of chairman” to Htay Oo, the statement said. Htay Oo is an ally of the president.

The USDP named one of the president’s closest aides, Tin Naing Thein, as secretary general of the party. He replaced Shwe Mann supporter Maung Maung Thein.

A list of Central Executive Committee (CEC) members issued by the USDP on Thursday showed other allies of Shwe Mann have been replaced by politicians moved out of government positions in a presidential reshuffle just hours before the overnight drama unfolded.

Shwe Mann would remain a party member and contest the election in his own constituency, Than Tun, the head of the CEC, told reporters on Thursday.

Thein Sein spearheaded reforms after taking power in 2011 that initially surprised the world with their speed and breadth. But reforms have stalled as the election has come into focus.

Both Thein Sein and Shwe Mann have suggested they would accept the job of president after the November 8th parliamentary election, the first free election in Burma in 25 years.

On Wednesday, the USDP selected only 59 of 159 senior officers who retired from the military to stand, the party sources said.

The decision likely angered officers and politicians keen to preserve the military’s sway. The USDP is comprised largely of former military officers and was created from a social movement established by the former junta.