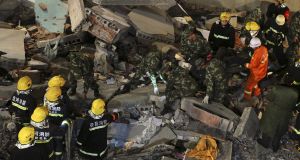 A two-storey building collapsed into rubble while workers were trying to prop up the second floor during renovations in central China, killing 17 construction workers and injuring 23.

The collapse happened on Friday afternoon in the Wuyang County town of Beiwudu in Henan province while work was being done to shore up the building, the county government said.

Forty people were pulled from the debris by early this morning.

Nine injured workers are said to be in a serious condition.

Those suspected of being responsible for the collapse have been taken into police custody and its cause is under investigation, the county government said.

Many of the victims were crushed by falling chunks of the building and at least one had spinal injuries that may cause paralysis, Wuyang People’s Hospital head Liu Jinshan told state broadcaster CCTV.

“When the patients came and were sent into intensive care unit, their injuries were really bad,” he said.

CCTV quoted a construction worker in hospital as saying workers were using a hoisting jack to push up a corner of the first floor of the two-storey building when the collapse happened.

The building was built in the 1990s, the broadcaster said.