Birth rates in Japan fall to lowest level on record

At current rates, Japanese population set to fall from 126.5 million to 51 million by 2115 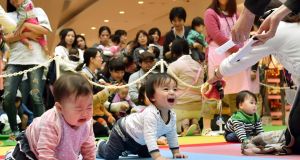 Babies compete in a crawling competition hosted by a Japanese magazine that specialises in pregnancy, childbirth and child-rearing. Photograph: Kazuhiro Nogi/AFP/Getty Images

The number of Japanese children born this year was the lowest since records began in 1899, deepening a demographic crunch and ensuring the country’s population will continue to decline for decades to come.

There will be 941,000 births in Japan in 2017, according to estimates released on Friday by the ministry of health, labour and welfare, compared with a peak of almost 2.7 million during the baby boom that followed the second World War.

Despite a strong economy, Japan’s total fertility rate – which measures the number of children a woman is expected to have over a lifetime – is 1.44. That is higher than the 1.17 in South Korea but below the figure of 1.82 for the US or 1.96 in France.

Birth rates in Japan have been low since the 1970s, and the accumulated effect means the country’s population is forecast to plummet.

Overall population decline in 2017 was the highest on record at 403,000, equivalent to a city the size of Minneapolis, Bristol or Toulouse. Projections from the National Institute of Population and Social Security Research suggest the pace of decline will accelerate and that by 2045 Japan will be losing about 900,000 residents a year.

On current trends, the population is set to fall from 126.5 million to 88 million by 2065 and to just 51 million by 2115. That would transform the country with implications for everything from the economy to pension sustainability and national defence.

The government of Shinzo Abe, the prime minister, has made raising Japan’s birth rate a priority. On Friday, it approved a budget that takes the first steps towards providing free pre-school, private high school and university education in an effort to reverse the trend.

Unless the low birth rate is reversed, the only option to increase Japan’s population would be for it to take in more immigrants. Yet despite high inflows of guest workers drawn by the strong economy, Japanese politicians have been reluctant to debate the subject.

Mr Abe’s government has instead set a target to raise the total fertility rate to 1.8. Officials hope the strong economy, combined with measures making it easier for women to combine work and childcare, will encourage families to have more children.

“We’d like to halt the decline by advancing our strategy to support children and make an easier environment for giving birth,” the ministry said. – Copyright The Financial Times Limited 2017