Blaze which has been burning for two weeks has destroyed more than 1,000 structures 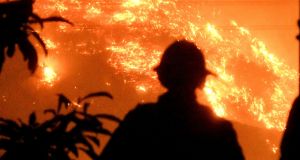 Firefighters watch the Thomas wildfire in the hills outside Montecito, California, on Saturday. Photograph: Reuters 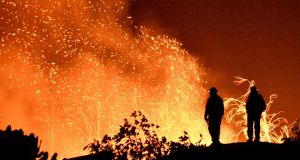 The Thomas wildfire burns in the hills and canyons outside Montecito. Photograph: Reuters 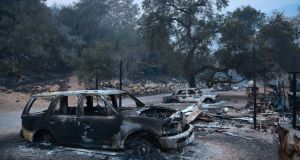 A raging California wildfire powered by fierce winds grew into the third-largest in state history last night as forced evacuations turned neighbourhoods into ghost towns and ash fell in some areas like heavy snow.

High winds and dry conditions were expected to remain through the weekend to power the so-called Thomas Fire in Southern California.

It has destroyed more than 1,000 structures and threatened 18,000 more since starting on December 4th, including homes in the wealthy enclave of Montecito just outside the coastal city of Santa Barbara.

“It is a beast,” Santa Barbara County Fire Department Division chief Martin Johnson told a news conference.“But we will kill it,” he said.

Nearly 8,500 personnel using nearly 1,000 engines and 32 helicopters were battling the blaze, which was 40 per cent contained on Saturday evening.

A new evacuation order was issued for parts of Santa Barbara County on Saturday as high winds whipped the fire through bone-dry terrain.

In Montecito, smoke billowing from nearby canyons and pushed by the high winds choked the air, hindering aircraft from dropping flame retardant, the Governor’s Office of Emergency Services said.

The wildfire forced many schools to close for days, shut roads and drove hundreds of thousands from their homes. It was also responsible for poor air quality throughout southern California.

An evacuation order for the city of Ventura, which was hit hard in the first days of the fire, was lifted on Saturday morning.

“Our backyard, it’s like a rain of ash. I don’t even want to step back there,” said Janet Harrington (56) an artist and writer who grew up and lives in Ventura.

Her son Ryan said: “I can count 10 people who lost their homes. My best friend from high school, his mom’s house burned down.”

The total cost of fighting the fire had come to more than $110 million by Saturday evening, as flames blazing over steep hills lit up the night skies.

The 13 days of shifting winds and evacuations have taken their toll on a weary population.

Paul Pineda, who lives in Fillmore, about 90kmnorthwest of Los Angeles and on the eastern flank of the fire, said he will flee if the blaze gets too close.

“It’s pretty crazy. Went to sleep last night about midnight and then woke up to the roar of this fire coming through about 3am,” Mr Pineda said.

This year has been unprecedented for California in terms of structures lost and the size of the wildfires, officials said.

Five of 20 most destructive fires in recorded history ravaged the state in 2017, according to Cal Fire.

The largest wildfire in state history was the 2003 Cedar blaze in San Diego County that consumed 273,246 acres and caused 15 deaths.

The hot Santa Ana winds have propelled the fire’s expansion, at times sending embers far ahead of its main flank. They were forecast to gust at up to 80kph on Sunday with critical fire conditions remaining through Monday, National Weather Service forecasters said.