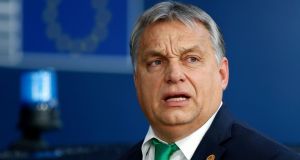 Hungary’s prime minister Viktor Orban: “It’s not even worth starting the [EU] process against Poland as there’s no chance to carry it through. Hungary will be there and form a road block they can’t get around,” he said. Photograph: Francois Lenoir/EPA

Hungarian prime minister Viktor Orban has warned the European Union that he will block any attempt to punish Warsaw over sweeping reforms that Brussels says threaten the rule of law in Poland.

Mr Orban has clashed with the EU on a range of issues as he seeks to build an “illiberal democracy” in Hungary, and allied with fellow right-wing populists in Poland in accusing Brussels of meddling in the affairs of sovereign nations.

The European Commission this week began unprecedented “article 7” disciplinary proceedings against Poland after its government introduced 13 laws in two years that give it great sway over the judiciary.

“It’s not even worth starting the process against Poland as there’s no chance to carry it through. Hungary will be there and form a road block they can’t get around,” Mr Orban said on Friday.

“It’s in our interests to stand alongside Poland . . . and say clearly that no European decision can be taken to punish Poland, because Hungary will use its right to prevent this,” he added.

Speaking to Hungarian state radio, Mr Orban said that “if somebody attacks Poland, the whole of central Europe is under attack . . . Without Poland there is no strong central Europe.”

The European Commission recommended on Wednesday that Poland be given a formal warning, which requires the backing of 22 member states.

The so-called nuclear option in article 7 – which allows for sanctions including the suspension of a country’s EU voting rights – requires unanimous approval, however.

Frans Timmermans, vice-president of the commission, said action must be taken against Poland over reforms “which mean that the country’s judiciary is now under the political control of the ruling majority. In the absence of judicial independence, serious questions are raised about the effective application of EU law . . . We are doing this for Poland, for Polish citizens.”

Poland’s leaders insist the changes are needed to modernise and clean up a judicial system that they claim is still encumbered by vestiges of the communist era.

Officials in Warsaw accused Brussels of punishing Poland’s government for refusing to accept an EU quota plan to resettle refugees around the bloc, which Hungary and other central European states also strongly oppose.

“We must hold on until people in western Europe, following in the footsteps of central Europeans, get strong enough and are able to use their democratic means, the elections, to force their leaders to pursue politics that reflect the people’s wish and rejects migration,” Mr Orban said.

With tension growing between Brussels and eastern members of the EU, Hungary and Poland hope new Czech prime minister Andrej Babis will strengthen their anti-immigration and Eurosceptic alliance, and Romania’s government this month also pushed through controversial reforms to boost its control over the judiciary.

1 One hundred Irish retailers for all your online Christmas shopping
2 Gym owner plans to defy restrictions and open
3 Miriam Lord: All test and no trace makes Jack, and heaven knows who else, a very ill boy
4 Des Bishop apologises to Traveller community for comments in interview
5 Varadkar says ‘dumping’ contact tracing problem on GPs ‘unfair’
Real news has value SUBSCRIBE