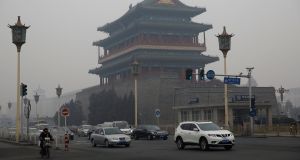 The Chinese capital Beijing issued a “red alert” for air pollution on Friday morning, saying it was enacting for the second time the highest-level emergency pollution plan in advance of a prolonged spell of smog.

The crisis measures were expected to start Saturday and last for four days.

Beijing first issued a code red on air pollution last week. The measures further raised awareness of toxic air in the city of 22 million and underscored for the rest of the world the dismal state of the environment here.

The measures took effect from December 8th to December 10th, and included the shutdown of more than 3,200 schools, the pulling of about half the city’s 5 million cars off the road each day and the temporary closing of factories and construction sites in the municipal area. The same is expected to be in place during the second crisis period.

But those measures did little to curb the smog the first time. Toxic air cloaked Beijing until strong winds blew the pollutants south. The main source of foul air in the capital comes from coal-burning factories in surrounding provinces, not from activity in the city itself, and cities in those provinces did not take the same drastic emergency measures as Beijing did. Many parts of northern China, including the provinces of Hebei, Henan and Shanxi, regularly have air quality that is worse than that of Beijing.

Pollution of all forms is one of the greatest concerns of Chinese citizens and undermines the legitimacy of the Communist Party. Officials are struggling with how much information on pollution to disclose. Since 2012, public pressure has resulted in greater official transparency on air quality.

The coming red alert is expected to last longer than the previous one. It is scheduled to start at 7 am Saturday and end at midnight Tuesday, according to a phone text message sent to Beijing residents on Friday morning. City officials are supposed to inform the residents 24 hours before emergency measures start.