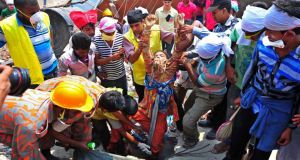 Brush with death: rescuers pull a garment worker alive from the rubble of the collapsed Rana Plaza building, in Savar, outside Dhaka. Photograph: Reuters

It was an image of horror that made people in the West think uncomfortable thoughts about the human cost of the clothes on their backs: a couple embracing in death, their bodies coated in the dust of a Bangladesh garment factory supplying western brands, the plant’s shoddy structure having collapsed under the weight of their toil.

The Rana Plaza building in Gazipur, 40km from Dhaka, collapsed in on itself in April, claiming 1,132 lives. It was the worst disaster in the history of the garment industry, and one that brought uneasy focus on to the relationship between the West’s consumer demand and the need to provide work in the developing world.

Survivors said the building had cracked the previous day and the police had ordered an evacuation, but management had taken no action, ordering that the plant be kept open. More than 2,000 people were working in the building at the time of its collapse.

It was only the latest in a series of tragedies in this industry in Bangladesh. In November last year 112 workers died in the Tazreen Fashions factory fire.

The Rana Plaza collapse put enormous pressure on the Bangladeshi government, on factory owners and on foreign retailers to drastically reform an industry that employs four million people and generates 80 per cent of Bangladesh’s export earnings.

Activists everywhere agree that much more needs to be done to appraise structural-safety standards at factories in low-cost manufacturing countries.

Retailers’ reaction
Europe is generally considered more proactive than the US when it comes to creating sustainable measures to deal with safety. Marks & Spencer, H&M and other retailers agreed to independent factory inspections and action to improve buildings in Bangladesh.

A European-led group of retailers and union groups has signed the Accord on Fire and Building Safety in Bangladesh, which is generally considered more effective than the Alliance for Bangladesh Worker Safety.

The alliance was set up in July by North American companies, Wal-Mart and Gap among them, because they believe the European initiative gives unions too much control over ensuring workplace safety. Activists say the US agreement allows manufacturers to avoid responsibility.

There is no duty on Bangladeshi garments exported to the EU. This is because Bangladesh is one of the least-developed nations, and so has duty-free and quota-free access to the EU.

But European trade commissioner Karel De Gucht this month warned Bangladesh of serious trade actions, including a possible end to duty-free access to the European market, if labour rights and workplace safety were not improved substantially.

In July the EU, along with the International Labour Organisation, signed an agreement with the Bangladeshi government committing the country to time-bound actions for the improvement of labour rights, working conditions and factory safety.

“There has been a good response from the European firms but nothing from the US,” says Kalpona Akter, founder of the Bangladesh Centre for Worker Solidarity and herself a former garment worker.

She says the Rana Plaza collapse was merely the biggest of hundreds of factory disasters taking place in the industry. Compensation costs are estimated at about €52 million. Although European brands, including Primark, El Corte Inglés and Benetton, as well as the Canadian company Loblaw, have joined a compensation co-ordination committee for Rana Plaza victims, US companies have not joined it. “Compensation is so important because so many families are suffering – many families don’t have anyone left to support them,” says Akter.

Akter is the foremost voice representing the 3.5 million women working in the garment industry in Bangladesh. As a 12-year-old girl Akter worked 100 hours a week for less than €5 a month to support her family, before she was fired in 2000 for her labour-rights activism.

The world’s biggest garment manufacturer, by far, is China. But it is notable how, despite the spate of fatal factory incidents that have put their reputations at risk, the big apparel manufacturers are still banking on Bangladesh.

Eighty-six per cent of the chief purchasing officers at leading clothing companies in Europe and the US plan to buy less from China over the next five years because of declining profit margins and capacity constraints, according to a recent study by the management consultancy McKinsey.

Bangladesh is the world’s second-largest garment manufacturer, with exports worth €15 billion a year, mostly to Europe and the US.

Wave of strikes
In September almost 20 per cent of the country’s 3,200 workshops were hit by a wave of strikes calling for better pay and conditions.

“These workers’ rights are being discussed all over the world now, and the government is nervous,” Amirul Haque Amin, head of the National Garment Workers Federation, an umbrella group representing 37 unions, told Reuters in October. “There is this pressure now. This has given us the opportunity to raise our voices.”

In the face of inaction and prevarication, Bangladeshi workers are even prepared to destroy factories to get their demands met.

In November, arson was blamed for a huge fire at a 10-storey factory building, also in Gazipur. It was one of the biggest clothes factories in Bangladesh, employing 18,000 people. Police said the fire followed protests by garment workers demanding higher wages and better conditions.

Ultimately, the fate of workers in countries like Bangladesh is in the hands of western consumers. Are we prepared to pay a few euro more for our clothing?