Australian TV presenter, Sonia Kruger, has faced a backlash online after she called for Australia's borders to be closed to Muslims. Video: Channel 9 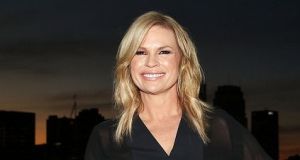 Sonia Kruger on Muslim migration to Australia: ‘I would like to see it stop’

The TV presenter Sonia Kruger has called for an end to Muslim immigration to Australia, saying she agrees with the US presidential candidate Donald Trump’s stance on immigration.

The host of Channel Nine’s The Voice and Today Extra was discussing the massacre in Nice when she said she agreed with the views expressed by the Herald Sun columnist Andrew Bolt, who argued in a column “the more Muslims we import, the more danger we are in”.

“Personally I think Andrew Bolt has a point here,” Kruger said to Today’s Lisa Wilkinson on Monday. “There is a correlation between the number of people in a country who are Muslim and the number of terrorist attacks.

“I have a lot of very good friends who are Muslim, who are peace-loving, who are beautiful people, but there are fanatics.

“Personally, I would like to see it stop now for Australia. I want to feel safe and I want to see freedom of speech.”

Kruger repeated Bolt’s claim in his Monday column, Muslim migration in France opens door to terror, and said that Japan didn’t have many Muslims migrants so it had no terrorist attacks.

“I want to feel safe, as all of our citizens do when they go out to celebrate Australia Day, and I’d like to see freedom of speech,” Kruger said.

But her remarks were challenged by her Today Extra co-host, David Campbell, who interjected: “I’d like to see freedom of religion as well, as well as freedom of speech. They both go hand in hand.”

Campbell, who is also a singer and the son of rock singer Jimmy Barnes, said of Bolt’s piece: “This sort of article breeds hate.”

But Kruger said victims of the Nice attacks would agree with her. “I would venture that if you spoke to the parents of those children killed in Nice, they would be of the same opinion.”

When she came off air Kruger posted a statement on Twitter, saying that, as a mother, she felt it was vital such issues should be discussed in a democratic society.

A former dancer, Kruger is a familiar face in Australian households as the long-time host of Dancing with the Stars and for her role as Tina Sparkle in the hit 1992 film Strictly Ballroom. She was a reporter on TV show Today Tonight and host of Nine’s Big Brother.

Her views on immigration also attracted attention in 2008 when hosting Dancing with the Stars. She joked about her outfit for the Melbourne Cup, saying a “sweat shop of illegal immigrants” was working on it, before turning to the show’s musical director, Chong Lim, and saying, “How’s the family Chong? All right?”

Seven eventually apologised for her comments after viewer complaints.

In his column Bolt again brought Waleed Aly, host of TV show The Project, into the debate, accusing him and other “prominent Muslims” of turning almost every discussion on Islamist terrorism into a criticism of the west.

“Of course, most Muslims are great citizens and some are widely admired,” Bolt said. “They hate terrorism. They want peace. All that is true and must always be kept in mind.

“But most are troublingly silent when their top Muslim leaders preach hatred, excuse terrorists and blame the west for inviting jihadist attacks.”