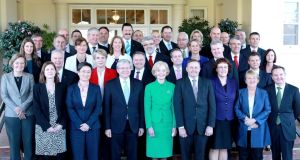 Mr Rudd also rewarded some of his supporters, with deputy Anthony Albanese given the communications post, Joel Fitzgibbon agriculture and powerbroker Bill Shorten adding school education to his portfolio of workplace relations.

The new ministry of 30, sworn in today, will have 11 women. “I have assembled today a strong economic team,” Mr Rudd told reporters in Newcastle. “We’ll have the largest number of women of any cabinet in Australia’s history.”

Mr Rudd, 55, needs to rally Labor and clarify his policy priorities as polls taken in the wake of his return as leader indicate he may help avert a wipeout by Tony Abbott’s opposition coalition at this year’s election.

The party’s talent pool has been drained by ministerial resignations, dismissals and reshuffles from three leadership spats since Ms Gillard ousted him in 2010.

“The prime minister will be impressing on his team that there can’t be any slip-ups and it needs to portray a unified front,” said Haydon Manning, a politics professor at Flinders University in Adelaide. “The fact that a lot of the names in the ministry won’t be familiar to many in the public isn’t the main concern. It’s all about getting the message across that this can provide credible government.”

While Mr Rudd hasn’t committed to Ms Gillard’s pledge to hold an election on September 14th, he must hold it this year. Governor General Quentin Bryce swore in the ministers and parliamentary secretaries in Canberra today. “The new ministry isn’t even the B team, it’s the C team” Abbott, 55, told reporters in Canberra today. “Not too many days will pass under Kevin Rudd when people will feel nostalgic for Julia Gillard.”

The appointments come after polls conducted by Newspoll, Galaxy and ReachTEL, conducted after Mr Rudd’s June 26th removal of Ms Gillard, show that while Mr Rudd’s return has boosted support for Labor, the party would still lose the election if it were held now.

A Newspoll published in The Australian newspaper today shows Mr Rudd is ahead of Mr Abbott as preferred leader by 49 per cent to 35 per cent. The poll, conducted June 28-30th, has the coalition in front of Labor by 51 per cent to 49 per cent on a two-party basis, designed to gauge which party is most likely to form government under Australia’s preferential voting system.