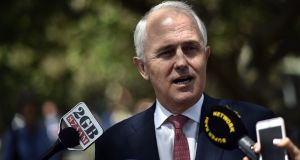 Australia’s pro-republic prime minister Malcolm Turnbull on Monday scrapped knights and dames from the nation‘s honours system, less than a year after a furore sparked by the award of a knighthood to Prince Philip, Queen Elizabeth’s husband.

Former prime minister Tony Abbott, a staunch monarchist, reintroduced the antiquated honours in 2014, provoking criticism that he was out of touch with public sentiment.

Mr Abbott was ousted by Mr Turnbull in a party coup in September.

The politically disastrous decision to give Britain’s Prince Philip the nation‘s highest honour, Knight of the Order of Australia, on Australia Day, has been cited as the beginning of the end for Mr Abbott.

The decision by Mr Turnbull, a former head of the national republican movement, to scrap the honours may be interpreted as a signal of his willingness to revisit the thorny question of Australia‘s relationship with the monarchy.

“Knights and dames are titles that are really anachronistic, out of date and not appropriate in 2015,” Mr Turnbull told reporters.

Opposition Greens Party leader senator Richard Di Natale welcomed the decision, even as he used it to mock the government.

Queen Elizabeth is Australia‘s largely ceremonial head of state, but has the power to approve the abolition of parliament, which last happened in the controversial 1975 toppling of Gough Whitlam’s government.

Australia’s sometimes strained relationship with the British crown came to a head in a 1999 national referendum, when almost 55 percent of Australians voted against breaking with the monarchy, defeating Mr Turnbull’s republicans.

A poll this year for the Australian National University showed that public support for a republic has fallen further since the referendum, while the royals’ popularity has risen.

But Mr Turnbull’s move into the leadership has buoyed the hopes of republicans eager to revisit the issue in a fresh referendum, despite his ranking of the faltering economy, not the monarchy, as his government’s top priority.