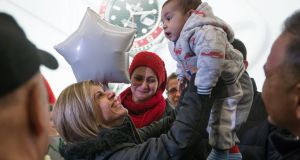 The uncle of drowned Syrian toddler Alan Kurdi, whose body pictured on a Turkish beach three months ago prompted a global outcry, arrived in Canada with his family on Monday.

CBC Television broadcast the arrival of Mohamed Kurdi, his wife and five children in Vancouver, where they had an emotional reunion with his sister Tima Kurdi.

She lives in British Columbia and sponsored the family’s relocation to Canada.

The family chanted: “Thank you Canada” shortly after being reunited.

A photograph of the tiny body of Alan Kurdi, face down in the surf of a Turkish beach, appeared in newspapers across the world.

The image brought international attention to the refugee crisis in the region and sparked outrage at the perceived inaction of developed nations to deal with the issue.

The child’s brother and mother were among those who died when two boats capsized as they tried to cross the waters from Turkey to the Greek island of Kos.

The children’s father, Abdullah, who is Mohamed Kurdi’s brother, survived.

Tima Kurdi said at the time that she had tried to sponsor Mohamed to come to Canada but was not successful.

She had hoped to sponsor Alan and his family next.

Former Canadian prime minister Stephen Harper and his Conservative government came under fire after it emerged that the family had wanted to emigrate to Canada.

The Conservatives lost the October election to Justin Trudeau’s Liberal Party, which pledged to bring in 25,000 Syrian refugees.

Tima Kurdi told reporters she was thankful to Trudeau “for opening the door” and showing other countries how do deal with the refugee crisis.

Earlier this month, Trudeau was in Toronto to greet the first planeload of Syrian refugees sponsored by the Canadian government.