US citizen surrenders after fighting for Somalia’s al-Shabaab 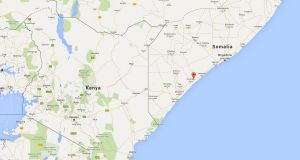 A map shows the location of Barawe, southwest of Mogadishu, where US citizen Malik John, who had fought with Islamist militant group al-Shabaab, has surrendered to officials. File photograph: Google Street View

A US citizen who fought for the Somali Islamist group al-Shabaab has surrendered to authorities in the Horn of Africa country after he defected from the militants, a Somali official said on Monday.

Colonel Ali Dalel Hirsi, a military officer, said US citizen Malik John had surrendered to officials on the edge of Barawe, about 220km (135 miles) southwest of the capital, Mogadishu.

“[The American was caught] this morning on the outskirts of Barawe town,” Col Hirsi said.

John told Reuters from captivity he was a 31-year-old man from Maryland in the US who had been fighting for al-Shabaab for about four years.

“I decided to leave them two months ago. I hated them because I found their ideology was totally wrong,” John said, adding that he finally escaped the group six days ago.

John said he walked for days, eating bread and maize on the way. “I am physically OK now but not mentally,” he said.

Somalia’s government has been trying to persuade many al-Shabaab fighters to defect by promising amnesties for fighters who leave the group.

John said he had heard about the Somali amnesty. “If possible I would like to return [to] my home in Maryland,” he added.

The US, other western powers and countries in the region see the fight against the al-Qaida-aligned group as a vital part of the battle to prevent Islamist militancy spreading in East Africa and beyond.

In recent months some fighters in al-Shabaab have pledged allegiance to Islamic State, which has strained relations between different factions within the group.