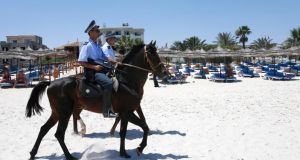 Tunisia has extended its state of emergency for two more months, the presidency said on Friday, in a security crackdown launched after an Islamist militant shot dead 39 people at a seaside tourist hotel in June.

A presidency statement carried on the state news agency said the extension was effective from August 3rd and was decided on after consultation with the prime minister and parliament speaker.

President Beji Caid Essebsi declared the emergency shortly after the beach massacre in Sousse. In March, two gunmen killed 21 foreign tourists and a policeman at Tunis’s Bardo Museum. Both attacks were claimed by the Islamic State jihadist group.

The state of emergency temporarily increases the security powers of the army and police including scope for detaining suspects, and curbs the right to public assembly.

No reason for the extension was given. But on July 10th, Britain cited a continued high risk of militant attack in Tunisia, spurring thousands of British tourists to rush home. Thirty of the dead in the Sousse attack were Britons.

Last week, parliament approved a law allowing the death penalty for those convicted of terrorism charges, a Bill that has drawn criticism from rights groups complaining it will curb rights such as access to lawyers for detainees.

The North African country has undergone a largely peaceful transition to democracy since a 2011 popular uprising but the army has been fighting a rise in Islamist militant violence.

Tunisia is especially concerned about militants entering from adjacent Libya, where Islamic State has established a toehold amid the chaos caused by two rival governments battling for control, leaving a security vacuum.

Tunisia says it has started building a wall and trench along the insecure 168km (105 miles) of its frontier with Libya. The Sousse gunman obtained training with militants in Libya before carrying out his attack.