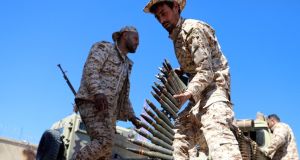 A member of Misrata forces, under the protection of Tripoli’s forces, prepares himself to go to the front line in Tripoli Libya April 8, 2019. REUTERS/Hani Amara TPX IMAGES OF THE DAY

Tripoli’s main airport came under attack from forces loyal to General Khalifa Haftar, the warlord who has launched an offensive to capture the Libyan capital, as the EU’s foreign policy chief called for a truce in the North African country.

An official at Mitiga, Tripoli’s only functioning airport, on Monday confirmed the air strikes, according to the Reuters news agency, as clashes continued between Gen Haftar’s forces and the militia groups defending the city, home to the UN-backed government led by prime minister Fayez al-Sarraj.

There were unconfirmed reports that three missiles had hit the runway of the former military facility that has been used for civilian traffic since 2014 when fighting wrecked the international airport.

Gen Haftar’s self-styled Libyan National Army has reached the outskirts of Tripoli after a rapid sweep westwards across the oil-exporting country. The LNA, which has spread from its base in eastern Libya, over the weekend launched air strikes against other targets in southern Tripoli. Its forces have also been targeted at least once by air strikes from groups loyal to Mr Sarraj.

Federica Mogherini, the EU foreign policy chief, said European foreign ministers who met on Monday were united in calls for a truce. All sides in Libya “should go back to the negotiating table under the auspices of the UN and make sure that the Libyan people get what they really want, which is peace and stability for their country”, Ms Mogherini said.

However, there have been tensions between France and Italy over Libya in the past. Paris has supported Gen Haftar as a partner in the fight against terrorist groups such as Islamic State in the Sahara, while Italy has taken the side of the Tripoli authorities to secure its efforts to stem illegal immigration.

However, Reuters on Monday cited an unnamed French presidency official as saying that Mr Sarraj should remain the key player in Libya and underlining the need to try to conclude a negotiated peace process.

Ghassan Salamé, UN special envoy for Libya, visited Mr Sarraj on Monday to signal the UN’s support for his embattled administration. Mr Salame has been working to organise a national conference aimed at fostering reconciliation between Gen Haftar and the UN-backed government.

The UN said about 2,800 people have been displaced by the clashes in Tripoli since the LNA launched its offensive on Thursday. It called again for a truce to evacuate the wounded and civilians trapped by the fighting.

MSF, the international charity, said it was extremely concerned for civilians, migrants and refugees held in detention centres in Tripoli. It said that 600 vulnerable people, including women and children, were trapped inside the Ain Zara centre in the capital, which it said was the centre of “active fighting”.

The charity also highlighted reports suggesting that in another detention centre, some people were being conscripted to work for armed groups. – Copyright The Financial Times Limited 2019