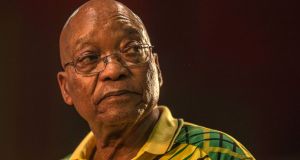 Thousands of Jacob Zuma supporters are expected to gather outside a Durban court on Friday where the former South African president will appear on corruption charges.

Religious organisations and pro-Zuma lobby groups were holding an all-night vigil for the former president on Thursday near the Durban high court in KwaZulu-Natal Province. On Friday morning they will march to the courthouse to protest against what they believe is a politically motivated witch-hunt against him.

Mr Zuma, who was forced to resign as president in February by the ruling African National Congress (ANC), is facing 16 fraud, racketeering, corruption and money-laundering charges that are linked to a 1999 multibillion euro government arms deal.

The original charges against Mr Zuma, which arose from 783 suspicious payments he received, were controversially dropped in 2009 shortly before he was appointed South Africa’s president for the first time.

The then acting national director of public prosecutions, Mokotedi Mpshe, withdrew the charges based on the content of recorded telephone calls between prosecutors and police produced by Mr Zuma’s lawyers. He said they showed “political meddling” in the case.

Mr Zuma has always maintained his innocence, and his lawyers opposed the Democratic Alliance (DA) party’s legal efforts to have the charges reinstated over the past decade at every legal juncture.

However, last year the supreme court of appeal in Pretoria declared the decision to set aside the corruption charges was irrational, and ordered the National Prosecuting Authority’s (NPA’s) chief prosecutor, Shaun Abrahams, to reinstate them. He did so last month.

According to the NPA, the state has a list of 207 willing witnesses who could be called upon to give evidence in the case, although the number who will appear is likely to be much smaller.

Lawyers for Mr Zuma are expected to legally challenge the decision to prosecute their client, but the grounds on which such a move will be based have yet to be made clear.

The Durban Metro Police say they are expecting up to 5,000 pro-Zuma protesters at the high court, but despite this impressive turnout, support for Mr Zuma outside his home province of KwaZulu-Natal has fallen off dramatically in recent years.

The ANC announced on Sunday that it would not support Mr Zuma in his forthcoming trial, but it agreed to let party members do so in their personal capacity. The South African Communist Party, which had strongly supported his rise to power in 2009, said on Thursday it was time he faced his day in court.

“The courts have come around to establish that this court case must happen,” communist party leader Blade Nzimande told reporters, adding: “We will abide by that and we won’t be outside the court.”