‘My strength is growing daily’ - daughter of poisoned Russian spy 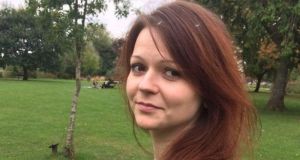 Yulia Skripal has said she is recovering from the nerve agent attack on her and her father, Sergei, and thanked the people of Salisbury for their support, but said she is feeling disoriented.

The first public words from either of the Skripals since the attack on March 4th came after Sergei’s niece, Viktoria, claimed from Moscow that Yulia had told her that both she and her father were getting better.

In a statement issued by the Metropolitan police, Yulia (33), said: “I woke up over a week ago now and am glad to say my strength is growing daily. I am grateful for the interest in me and for the many messages of goodwill that I have received.

“I have many people to thank for my recovery and would especially like to mention the people of Salisbury that came to my aid when my father and I were incapacitated. Further than that, I would like to thank the staff at Salisbury district hospital for their care and professionalism.

“I am sure you appreciate that the entire episode is somewhat disorientating, and I hope that you’ll respect my privacy and that of my family during the period of my convalescence.”

The statement was issued just hours after her niece Viktoria said she had spoken by phone to Yulia.

“She said everything is fine and she is doing OK,” Viktoria Skripal told the Guardian by telephone from Moscow. “That’s all I’m going to say.”

Viktoria Skripal then said a transcript of their phone call would soon be released by Russian news agencies. “Even in English,” she added. The audio recording of the conversation, which was made by Viktoria despite not knowing it was Yulia calling her when she picked up the phone, was later played on a talkshow on the Russian state-run television station Russia-1.

When asked about her father’s condition, she said: “Everything’s OK, he’s resting now, he’s sleeping. Everyone’s health is OK. No one has had any irreversible [harm].”

She appeared to turn down a visit from her cousin, citing the commotion around the case.

In the phone conversation, the voice attributed to Viktoria said she hoped to receive a visa on Friday and fly to the UK on Monday. “Vika, nobody will give you a visa,” came the reply. Viktoria agreed, but pushed on. “If they give it, I need you to tell me whether I can visit you or not, tell me that I can,” she said.The woman said to be Yulia demurred. “I think no, there is such a situation now, we’ll sort it out later,” she said.

She added: “Later, we will get it all sorted later, everything’s fine, we’ll see later.”

Alexander Yakovenko, the Russian ambassador to the UK, was asked if the phone conversation was genuine, at a press conference on Thursday. He did not directly reply but said only that Russia had asked Britain questions about the Skripals but had not had answers.

Viktoria Skripal, the daughter of Sergei’s late brother, has said she plans to go to London in the coming days to try to bring Yulia back to Russia.

On Wednesday evening, Viktoria Skripal said she had applied for a British visa and coordinated her trip with the Russian embassy in London. She said she expected Yakovenko to meet her, and said he had helped her apply for a passport.

“At the moment, I have just one goal: fly there and get Yulia, at the very least Yulia,” she said on the Russia-1 state news station. Sergei Skripal’s foreign citizenship made his situation “more complicated”, she said.

Viktoria Skripal appeared on several Russian talk shows on Wednesday, including one with Andrei Lugovoi and Dmitry Kovtun, both accused in the 2006 poisoning of the former spy Alexander Litvinenko in London.

Her father’s condition was described by the hospital as still critical but stable. Sergei Skripal (66), is believed to have been the main target of the attack.

NHS England said on Thursday that its policy was only to give an update on the Skripals’ condition when there had been a significant change.

If Sergei Skripal is “fine”, it would be a remarkable turnaround from the previous detailed prognosis that emerged.

A high court judgment related to the case and published following a hearing on March 20th, 21st and 22nd revealed that both Skripals were heavily sedated.

“The precise effect of their exposure on their long-term health remains unclear, albeit medical tests indicate that their mental capacity might be compromised to an unknown and so far unascertained degree,” the judgment said.

The Foreign Office said Yulia Skripal had so far chosen not to take up the Russian Embassy’s offer of consular assistance. A spokesman said: “We are pleased that Yulia’s condition has improved and pay tribute to the medical staff who have been treating her and Mr Skripal since they were attacked. “We have conveyed to Ms Skripal the Russian Embassy’s offer of consular assistance. Ms Skripal is now able to choose if and when to take up this offer, but to date she has not done so.”