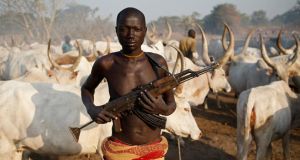 A man from Dinka tribe holds his AK47 rifle in front of cows in a Dinka cattle herders camp near Rumbek, capital of the Lakes State in central South Sudan. Photograph: Goran Tomasevic/Reuters.

Western powers and east African states, which want to prevent the fighting from destabilising a fragile African region, have tried to mediate between Mr Machar, who hails from the Nuer tribe, and president Salva Kiir, a Dinka.

But so far their efforts have been fruitless as clashes which started in Juba on December 15th enter their second week, reaching the country’s vital oil fields and destabilising a state which won independence from Sudan only in 2011.

Hundreds of people have been killed, with reports of summary executions and ethnically-targeted killings.

Information minister Michael Makuei said Mr Machar has not come to the negotiating table so the government plans to attack and retake Jonglei State capital Bor as well as Bentiu town, the capital of oil-producing Unity State.

“We are making a major offensive,” Mr Makuei said. “Today we will take over Bor.”

Joe Contreras, the United Nations spokesman in South Sudan, said on Monday there was sporadic fighting in Bor where about 17,000 people were seeking refuge at a UN compound.

Mr Makeui said the government continued to control parts of Unity State, including its oil fields, even after the army divisional commander there John Koang defected and joined Mr Machar, who named him governor of the state.

he denied reports that oil production has been disrupted in Unity State. “The oil at this moment is still flowing as no one is interested in the shutdown of oil.”

A US envoy for Sudan and South Sudan, Ambassador Donald Booth, arrived in Juba today to meet Mr Kiir and opposition groups.

Toby Lanzer, the UN’s humanitarian coordinator in South Sudan, said during a recent visit to Bor that many of the humanitarian compounds there had been looted. “There was a lot of looting, a lot of gun shots and a lot of dead bodies,” he told the BBC.

Mr Contreras said the UN was now sheltering about 42,000 civilians across South Sudan and would not leave the country despite worsening security situation.

“For those elements who are trying to intimidate us or who have attacked us, the message is loud and clear: we are here to serve the people of South Sudan and we are not leaving the country under any circumstances,” Mr Contreras said.

While Juba remains tense but calm, Mr Contreras added that there were reports of fighting between rival Sudan People’s Liberation Army factions about 25 km east of the capital.