Russian plane crash: All 224 people on board killed

Relatives of people that perished in a plane crash in Egypt's Sinai peninsula mourn their loved ones in a St. Petersburg airport. Video: Reuters

The flight radar for flight 7K9268 that was carrying 224 passengers and crew and travelling from the Egypt to St Petersburg. It disappeared from radar screens in Cypriot airspace, Russia’s RIA news agency reported 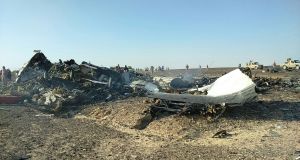 Debris at the site of the Russian plane crash in Sinai, Egypt. Photograph: EPA/STR 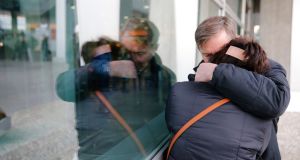 Relatives of passengers of MetroJet Airbus A321 at at Pulkovo II international airport in St. Petersburg, Russia. Photograph: Anatoly Maltsev/EPA 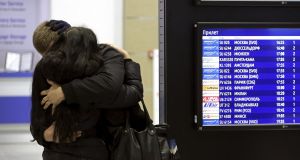 Relatives of victims embrace: All 242 people on board the flight were killed, according to Egyptian officials. Photograph: Reuters/Peter Kovalev 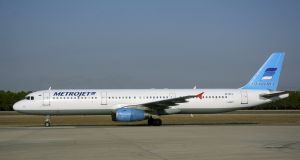 The Metrojet’s Airbus A-321 with registration number EI-ETJ that crashed in Egypt’s Sinai peninsula, is seen in this picture taken in Antalya, Turkey September 17th, 2015. Photograph: Kim Philipp Piskol/Reuters 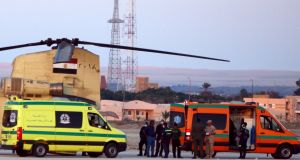 Egyptian army with police and rescue crew transfer bodies of victims of plane crash, from a civil police helicopter to an ambulance at Kabrit airport in Suez, east of Cairo. Photograph: Reuters

A Russian airliner carrying 224 passengers and crew crashed in Egypt’s Sinai peninsula on Saturday after losing radar contact and plummeting from its cruising altitude, killing everyone on board.

An Islamic State group based in Egypt has claimed responsibility. However, the claim that terrorists caused the airliner crash “can’t be considered accurate”, the Russian transport minister has said.

The Airbus A321, which was registered in Ireland under the registration number EI-ETJ, was operated by Russian airline Kogalymavia under the brand name Metrojet.

It was flying from the Sinai Red Sea resort of Sharm el-Sheikh to St Petersburg in Russia when it went down in a desolate mountainous area of central Sinai soon after daybreak, the Egyptian aviation ministry said.

An Islamic State group based in Egypt claimed responsibility for downing the passenger plane in a statement circulated on social media.

The claim of responsibility was also carried by the Aamaq website, which acts as a semi official news agency for Islamic State.

“The fighters of the Islamic State were able to down a Russian plane over Sinai province that was carrying over 220 Russian crusaders. They were all killed, thanks be to God,” a statement on Twitter said.

A north Sinai security source said initial examination showed the crash was due to a technical fault, but gave no detail.

The plane, he said, had landed in a “vertical fashion”, explaining the scale of devastation and burning.

The Russian embassy in Cairo said it had been told by Egyptian officials the pilot had been trying to make an emergency landing at El-Arish.

“I now see a tragic scene,” an Egyptian security officer at the site told Reuters by telephone.

“A lot of dead on the ground and many who died whilst strapped to their seats.

“The plane split into two, a small part on the tail end that burned and a larger part that crashed into a rock,” the security officer, who requested anonymity, said.

Both black boxes of the plane had been found, Mohamed Hossam Kemal, the civil aviation minister, told a news conference.

Mr Kemal said communications between the plane and air traffic control before the crash had been normal and that nothing irregular had occurred before the accident.

“The plane did not request a change of route,” he said.

Egyptian prime minister Sherif Ismail also told the news conference that there did not appear to be any unusual activity behind the crash, but the facts would not be clear until further investigations had been carried out.

Egypt is also preparing to receive the families of the victims.

A middle-aged woman was shown weeping and crying out.

Sinai is the scene of an insurgency by militants close to Islamic State, who have killed hundreds of Egyptian soldiers and police and have also attacked Western targets in recent months.

Security sources said there was no indication the Airbus had been shot down or blown up.

Two of Europe’s largest airlines, German carrier Lufthansa and Air France-KLM, said they would avoid flying over the Sinai pensinsula until there was clarity about the cause of the crash.

Irish aviation authorities have made contact with their counterparts in Egypt offering assistance in the investigation into the crash .

The Air Accident Investigation Unit (AAIU), which works independently under the auspices of the Department of Transport, made contact with Egyptian aviation authorities almost as soon as it emerged that the Airbus A321 had been registered in Ireland in 2012.

The A321 is a medium-haul jet in service since 1994, with more than 1,100 in operation worldwide and a good safety record.

It is a highly automated aircraft, relying on computers to help pilots stay within safe flying limits.

It had flown 56,000 hours in nearly 21,000 flights and was powered by engines from International Aero Engines consortium, which includes United Technologies unit Pratt & Whitney and Germany‘s MTU Aero Engines .

Mr Ismail was heading to the crash site in the Hassana area 35 km south of the Sinai Mediterranean coastal city of Al Arish with several cabinet ministers on a private jet, the Egyptian tourism ministry said.

Emergency services and aviation specialists were searching the wreckage at the site for any clues to the crash.

“We are hearing a lot of telephones ringing, most likely belonging to the victims, and security forces are collecting them and putting them into a bag,” a security officer said.

Mr Ismail told a news conference that 129 bodies had so far been removed and the chances of finding survivors were now near-impossible.

Bodies were transported to various hospitals, with 34 arriving in the Zeinhom morgue in Cairo early in the evening.

Russian state-run television station Rossiya 24 reported that officials were searching the Kogalymavia airline’s offices in Moscow and had seized some documents.

However, after the inspection, in March 2014, the airline remedied the breaches.

Kogalymavia was founded in 1993, and was earlier called Kolavia. Its fleet consists of two A320s and seven A321s.

Some Russian air crashes have been blamed on the use of ageing aircraft, but industry experts point to other problems, including poor crew training, crumbling airports, lax government controls and neglect of safety in the pursuit of profits.

The aircraft took off at 5.51am Cairo time (3.51am Irish time) and disappeared from radar screens 23 minutes later, Egypt’s civil aviation ministry said in a statement.

Accidents at cruising altitude are one of the rarest categories of accidents, but are also among the most deadly, accounting for 13 per cent of fatal incidents and 27 per cent of fatalities since 2005, according to Boeing.

Investigators would be looking into, among other things, the weather at the time, the pilots’ experience, maintenance records, signs of a stall and any evidence of an explosion.

Experts have warned that air accidents are usually caused by a cocktail of factors, both human and technical.

According to FlightRadar24, an authoritative Sweden-based flight tracking service, the aircraft was descending rapidly at about 6,000 feet (1,800 metres) per minute before the signal was lost to air traffic control.