Spirit of evil takes us to lack of unity and to destruction out of fanaticism, says pontiff 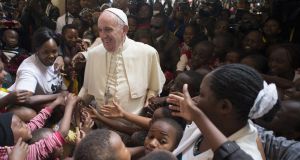 Pope Francis greets children during his visit in Nairobi, Kenya. The pontiff told a packed stadium in the city: ‘Let’s hold hands together, let’s stand up as a sign against bad tribalism.’

Pope Francis urged young Kenyans on Friday not to yield to the sweet lure of corruption, and urged them to help those tempted by “fanatical” ideologies.

Scrapping a prepared script, the Latin American pope addressed a packed Nairobi stadium with the down-to-earth and spontaneous style that has endeared him to Catholics and others around the world.

“The spirit of evil takes us to a lack of unity. It takes to tribalism, corruption and drugs. It takes us to destruction out of fanaticism,” the pope said, urging young people not to give in to these vices. “Let’s hold hands together, let’s stand up as a sign against bad tribalism,” he said, grasping the hands of two young people on stage.

Tribal loyalties often trump political allegiances in Kenya, and some other African nations, sometimes sparking violence. After being welcomed into the stadium with rapturous singing and dancing, including by President Uhuru Kenyatta, the first lady and clergy, the pope was cheered throughout his speech.

The president reshuffled his cabinet this week after several ministers were embroiled in corruption allegations. Corruption “is like sugar, sweet, we like, it’s easy,” Francis said.

“Also in the Vatican there are cases of corruption. “Please, don’t develop that taste for that sugar which is called corruption.”

In Kenya, the target of a spate of deadly attacks by Islamist militants, the pope has called for inter-faith dialogue, said God’s name can never be invoked to justify violence, and urged world leaders to tackle climate change.

Lack of education and work was a “social danger”, pushing some to radical ideologies. “God is much stronger than any recruitment campaign,” he said, adding youths should help potential victims by bringing them into groups or even asking them “to come and watch some football . . . Don’t allow them to remain on their own.

“That’s what comes to me now, spontaneously,” he said. Several praised his words. “The message that stood out from the pope was the one about corruption and tribalism,” said student Winnie Sankale (20).

Francis, known as “the slum bishop” before becoming pope because of frequent visits to the shantytowns of Buenos Aires, had earlier visited Nairobi’s Kangemi district, a neighbourhood of potholed roads, open sewers and rough shacks. Addressing slum dwellers, charity workers and clergy in a small church that lies a few hundred metres from smart apartments and gated residential compounds, the pope spoke of the “dreadful injustice of urban exclusion”.

“These are wounds inflicted by minorities who cling to power and wealth, who selfishly squander while a growing majority is forced to flee to abandoned, filthy and run-down peripheries,” he said, urging African governments to provide basic amenities.

Later on Friday, Francis arrived in the Ugandan capital Kampala for the second leg of his trip. He will stay in Uganda until Sunday, when he is due to travel to the war-torn Central African Republic – his final stop in Africa.