The 30ft and 4.5 tonne statue was unveiled by South African president Jacob Zuma 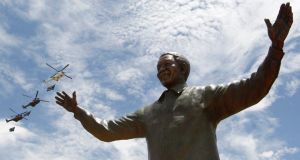 South African military and police helicopters fly past a nine-metre bronze statue of the late former South African president Nelson Mandela, after it was unveiled as part of the Day of Reconciliation Celebrations at the Union Buildings in Pretoria. Photograph: Thomas Mukoya/Reuters

The largest statue in the world of Nelson Mandela was unveiled yesterday in South Africa on Reconciliation Day, 24 hours after the revered former president was buried with full military honours in his home village of Qunu.

The 9m (30ft), 4.5 tonne statue of Mandela was unveiled by president Jacob Zuma. It stands in Pretoria, in front of Union Buildings, South Africa’s house of parliament, which is also celebrating its 100th anniversary, and which was the venue for the late president Mandela’s lying-in-state last week prior to his funeral.

Unlike many Mandela statues around the world which have the former African National Congress leader displaying a clenched fist, symbolising his campaign against the racial segregation era of apartheid, the new statue has his arms outstretched, seeming to call viewers into his embrace.

It was made by South African sculptors Andre Prinsloo and Ruhan Janse van Vuuren. It stands overlooking Union Buildings’ lawns, in the centre of which is a statue to Louis Botha, a Boer War hero and the first prime minister of the Union of South Africa – not a man whose legacy is celebrated in today’s South Africa.

At the unveiling, Mr Zuma said: “We laid Tata [Xhosa for father] to rest in Qunu only yesterday. Today, he rises majestically at the seat of government, as a symbol of peace, reconciliation, unity and progress.”

Unity
Explaining the outstretched arms, Dali Tambo, chief executive of the national heritage project company, which was involved in creating the statue, said : “There are quite a few statues of Madiba with his fist in the air. That was the symbol of the struggle era . . . We wanted a pose that said ‘unity’, ‘reconciliation’.”

Mandela died on December 5th, aged 95. He was buried on Sunday in his boyhood village of Qunu in Eastern Cape after a week of memorial services, eulogies and his lying-in-state.

During the apartheid era, December 16th was known as Dingaans Day and commemorated the 1838 battle of Blood River, in which some 500 Afrikaner voortrekker pioneers defeated more than 10,000 Zulu warriors. Political organisations such as the ANC and South African Communist Party in the past used the day for protest against white minority rule.

However, its focus, was changed in 1994 in an effort to promote peaceful co-existence between the former enemies, which Mandela espoused.